On the trail of Streets of Rage 4

Grigori(g) Rasputin! Think I used that one before…

Ah, a lovely day off. What shall I do? The suns shining, the birds are singing, and there’s excitement in the air! Best stay inside with the curtains closed and write some crap for Grig that only three people will ever see because it doesn’t have Minecraft in the title. Good. Anyhoo, let’s start afresh…

Well, it’s about that time again! Proceeding to disprove popular opinion that there is no life left in the old dog of Grigorig, we throw out another offering of epic proportions as if articles grow on trees here in the land of Grig! And so, sauntering from the mist like a Walrus on the 18th of February, we offer up yet another investigation of extreme relevance – the non existent Streets of Rage 4. And while nothing’s particularly going on with said game, that won’t stop us making an article about it. We here at Grig make our own news. 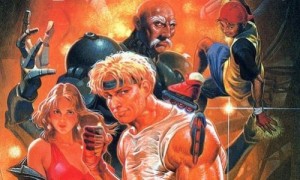 Now the early 90’s were a playground of fisticuffs of the highest order. Street Fighter, Fatal Fury, Mortal Kombat, they were all about putting ayne to the sword. I was going to say fist, but that probably sounds a bit wrong. Anyhoo, the one on one band wagon was well ridden, but ’twas not the only setup in camp beat ’em up. Handling the scrolling shenanigans of brawling-beatery was the likes of Final Fight, Double Dragon, Cadillacs and Dinosaurs, and Rival Turf. Sega looked on, and looking to stock their 16-bit monster with as much firepower as they could muster, rustled up their own IP. Thus the legendary Streets of Rage was born. 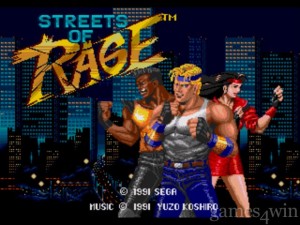 Streets of Rage 1 was a decent first crack of the whip. Coming at a time when studios were still getting a grip on the Megadrive hardware, the sprites weren’t massive, and animation frames were fairly sparse. A potentially limited memory amount may have been an issue with some of the clone bosses like the green Blaze twins… not that it’s stopped Capcom rehashing every asset they have even now with their upteen million gigs of space to this very day. The swines. Anyhoo, the music was exceptional, a fine piece of Yuzo Koshiro-ery taking the overall product quality up a notch, and though limited, the gameplay was fantastic. Shout outs abound to the Police car screen nuking escapades ahoy! Inspired! 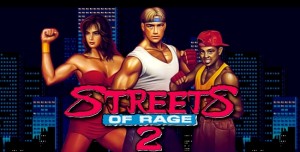 Streets of Rage 2 was where things really got cooking, with massive advancements in all areas, and thanks to influences from SF2, resulted in one of the best games of all time. Still admired today, this title really cemented the series as a legendary Sega franchise.

Streets of Rage 3 typically followed, but somehow lost its way a little, coming across as a little shoddy with graphics and gameplay that lost the sheen of 2, and even the soundtrack was surprisingly a bit cack. Yuzo must’ve been having an off day. Happens, I guess. 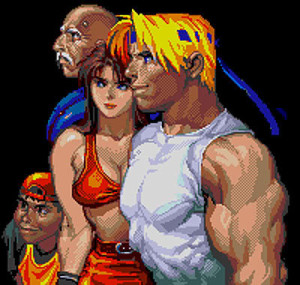 But we can forgive a brief fluctuation into the world of buh, as long as we don’t have to dwell there too long. And so, onwards and upwards! Cue the advent of a new generation of machines, and much hope of a fourth instalment…

Step forward Core Design, seemingly wishing to saddle up with Sega and ply their wares on their new fangled Saturn after doing well by them with Mega CD games like Thunderhawk, Battlecorps, and Soulstar. Thus, with the Streets of Rage name under their belts, Core set about putting together the fourth in the franchise.

It all was not meant to be however, as soon Core were pushing Sega for a multiplatform release with proposed PS1 and N64 versions in the mix. Sega obviously declined, and soon the plug was pulled on the Streets of Rage name. And so, with a rebranding called for, Fighting Force was born. 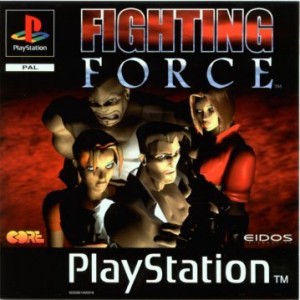 To be honest, slapping the Streets of Rage name on this game would have been a disgrace as it was slow, shoddy, looked crap, had terrible sound, and played like a clapped out donkey. Interestingly, such was the fall out with Sega, despite releasing on Sony and Nintendo’s platforms, the completed Saturn version never reached market. But while that game was no loss, perhaps the repercussions were more severe as Core walked away from the Saturn, taking Tomb Raider 2 and its sequels with them. Oof. 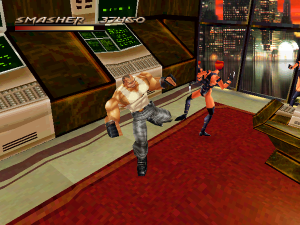 So technically, this is what Streets of Rage 4 could have been. Close one. Also spawned a PS1 and Dreamcast sequel… that was complete guff and somehow achieved being even worse than the original.

Step into the fray the real Streets of Rage 4 on the Saturn… or what turned out to be Die Hard Arcade. 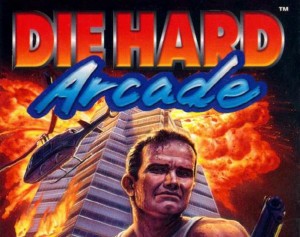 This scrolling brawler was allegedly at one point the elusive SoR4, until Sega decided against an arcade sequel and instead bizarrely secured the Die Hard licence and released it under that name. 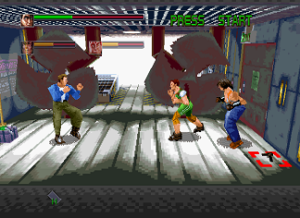 Running on Segas easy arcade to Saturn port coin op board, the S-TV, the game hit our living rooms in quality fashion. The fact that the game pretty much flew under the radar as Playstation waltzed all over the competition leaves it relatively unheard of among many gamers. Could the Streets of Rage licence have given the Saturn one great last hurrah? Guess we’ll never know, but many agree that the game would have been worthy of the name. Now sells for a pretty penny. And lo, the 32-bit era ended, and there wasn’t an ounce of official Ragery to be had. Grig.

Streets of Rage 4 was still MIA at the dawn of the Dreamcasts short lived life, despite new takes on other old licences. Something had to be done! And soon it was, as Sega looked to put right what once went wrong, Quantum Leap style. Setting the hounds at Ancient loose on the project, ’twas not long before playable sections of the game were conjured up for the delectation of Segas top dogs to sample. 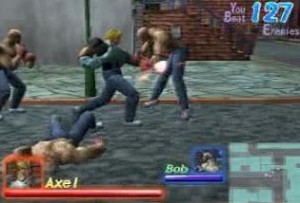 Alas, once again, and much like the Dreamcast itself, the project never really got off the ground. The fools of the day at the helm of Segas crumbling empire wrote the game off based on the fact that it was a scrolling beat ’em up, famously declaring that they didn’t even know what Streets of Rage was, let alone being aware that Sega owned the property and the fandom it had. In fact, it was only in more recent years that the tech demos shown to these idiots cropped up proving that teams within Sega had even worked on the project. 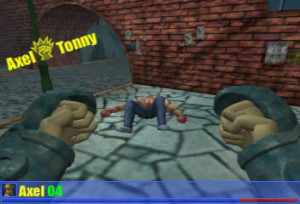 Featuring a mix of standard 3D brawling alongside an intriguing first person perspective, we can only dream from these meagre glimpses as to what could have been… although, in all honesty, while very early prototype game segments, it looked terrible, and is probably a good thing that this piece of junk never came to be to sully the good name of SoR, especially as a Sega became masters of running practically every one of their other beloved IP’s into the ground. 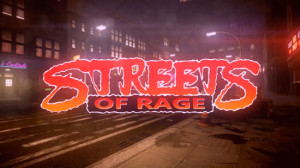 Streets of Rage Online, or what would theoretically be SoR4, suddenly seemed back on with the advent of the PS3/360 generation, as following a massive beat ’em up reboot thanks to the Street Fighter IV franchise, a li’l tech demo from the makers of Crackdown 2 started doing the rounds. 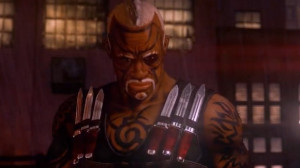 Starting with a gameplay video of Streets of Rage 2, the camera pans out to reveal the footage is being observed running on an old school arcade cab. Moving to the exterior of the building you see that it’s an arcade. But don’t go sniffing around in the back for the Street Fighter machines just yet, as before you know it, the place is ablaze after a band of hoodlums hurl a Molotov cocktail through the window obliterating the previously fine looking establishment! No wonder arcades are going out if business! 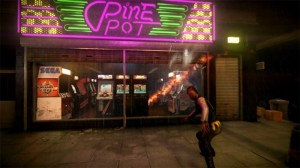 Now with Crackdown 2 under their belts, you’d be suitably understood for being nervous with Ruffian Games at the helm, what with that game being utter crap and all. And as if to heed the call of the buh signal… the game does look pants. 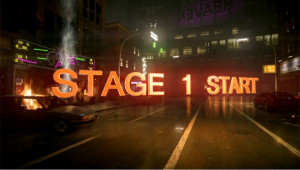 Still, turns out the cruddery was short lived, as without care for their foundering legacy, Sega again called time on proceedings. And while the Axel and Blaze devoid demo certainly looked like it would require a full flush rather than a merciful partial, we do wonder if with development, it could have been good. I mean, it probably wouldn’t, but I’m trying to defy my natural instincts and be positive. Not that that ever usually works out so well in the current gaming climate. 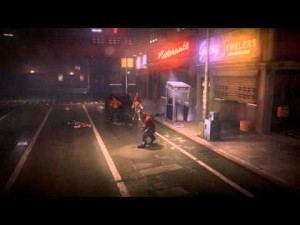 So there we have it. A Rage-redundant future is surely the only likely forecast on a very bleak gaming horizon. But all is not lost, for there is a game that captures all the elements of Streets of Rage and then some, made by genuine fans of the franchise and who ‘get’ the series in a way that the buffoons of the current Sega empire would never fathom. 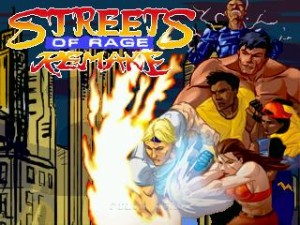 We are of course talking about Streets of Rage Remake by the amazing chaps at Bomber Games. The game is just brilliant, and feels like a true progression of the series without having to bow to the turdy trends of the modern era that have been forcing me backward to a point where I practically exclusively now only partake in retro gaming. And while Sega tried to shoot the whole thing down as it leapt the final hurdle in order to protect their IP, seemingly for the purpose of destroying it with the atrocious iOS versions with its glorious sound distorted beyond listenable use and still hasn’t been fixed, the game was completed and made it out. 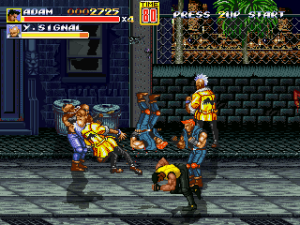 At the end of the day, it speaks volumes that it took someone else to not only do what Sega wouldn’t do for their fans in revisiting the franchise, but if recent releases are anything to go by it’s also more than likely they’ve made a better job of it than Sega would have ever likely been able to do themselves. Maybe one day, they’ll get their act together and not only revisit this legendary franchise, but also defy their current fad and actually make a good game. Sounds like a grigging tall order, and one I won’t likely be holding my breath over. But till then, Remake is my SoR4, and one that defies any expectation I could have hoped for. 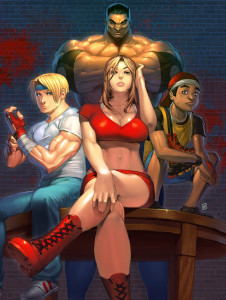 This entry was posted in Arcade, consoles, Dibbs Ahoy, Fighting, General, Sega and tagged streets of rage. Bookmark the permalink.

3 Responses to On the trail of Streets of Rage 4