Well this one was unexpected! Just as I trawled through the dying remnants of websites listed in my old computers favorites rubbernecking the demise of video games with a furrowed brow, the grey cloud of current day gaming gloom lifted for a moment as I saw the following…

‘Greetings from Funkotron! We haven’t been posting as often lately because we’ve gotten really busy with the new TJ&E game’ 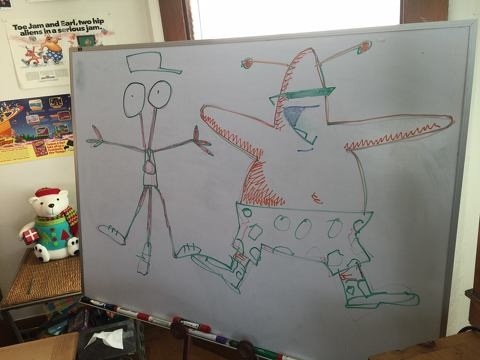 Da GRIIIIIIIIIIIG?!!!! Where’d that come from?!

Apparently some developer called HumaNature Studios who I’ve never heard of because I don’t care, are beavering away on this bad boy as we speak!

And lo, we only have to wait ‘three or four weeks’ before they share a wealth of information about said game! Could the golden age of gaming be about to reawaken?

Course the gloom descended very quickly again when I realised it will proble be some kind of ‘F2P’ mobile crap rather than a stampeding juggernaut of PS4 quality thus opening the floodgates to the rebirth of other classic licences such as Streets of Rage, Shinobi, and Golden Axe… but I do hold some foolish semblance of hope.

We stand by for crushing disappointment. And ’til then, laters.