It’s been a while since the ol’ vidya games were represented well with a hwality bit of magazinery. Last I can remember was Sega Saturn Magazine from way back in the late 90’s captained by Richard Leadbetter. But what’s even more interesting of late is the dwindling amount of magazines on offer. Once upon a time, any supermarket was littered with the things stretching as far as the eye can see. Now, it’s only about 4 or 5 crappy looking ones sporadically interspersed among a million iPhone/Pad offerings.

Oh, and Retro Gamer, which actually is pretty good.

CVG however, much as it always used to be, was well ahead of the game. The actual physical mag was discontinued back in October 2004 leaving the legendary name to the Internet based iteration that we find today.

Or, find for at least another few days anyway.

For as you may have read recently, CVG is about to shut its doors in Websville too. Sigh. I guess not everyone can have such solid foundations as those found with Grig… or in reality, if they’re up for the chop then we would really be in trouble here on the good ship Grig Orig were we accountable to anyone!

Anyhoo, enough of the buh! Let’s have a look at some fond memories from the CVG magazine-based archives before someone gets round to shutting us down! 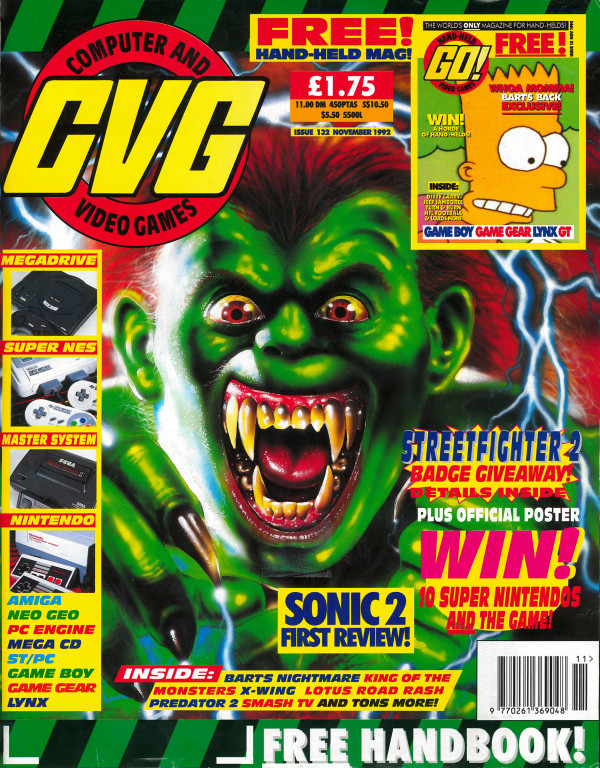 This is the first issue of CVG I remember buying. November 1992… which actually kinda feels a li’l later in the day than I thought, but still, this is the ol’ girl.

Yeah, I missed out on CVG’s age of C64 and the like, but I was well in the door for the Rignal-renaissance of console butt-kickery! ‘Twas a time of much gaming merriment, and with many well loved staff writers on board, had some high quality humour, second historically only to the hilarious type of tomgriggery found here in our own humble tome.

As you can tell by the cover, Street Fighter 2 was in full swing and the magazine was all the more exciting for its coverage. This was when SF2 literally felt like the biggest thing in the world. There was a coin op in every chip shop/bowling alley/swimming pool/pub/corner shop in the land, and was all that people at school talked about. And CVG were making sure they were having some of it!

Alas, as a hapless 12 year old I mercilessly butchered my copy, and the three following issues, in order to extract and plaster the SF2 player strategies for each character all over my bedroom wall. Still, they looked awesome. And they provided a helpful last minute reference when leaving for school and I knew I was gonna be taking someone on that day in the corner shops arcade. Not that I remember them helping me to win much. But at least I was well prepared with matchup knowledge for my losses! 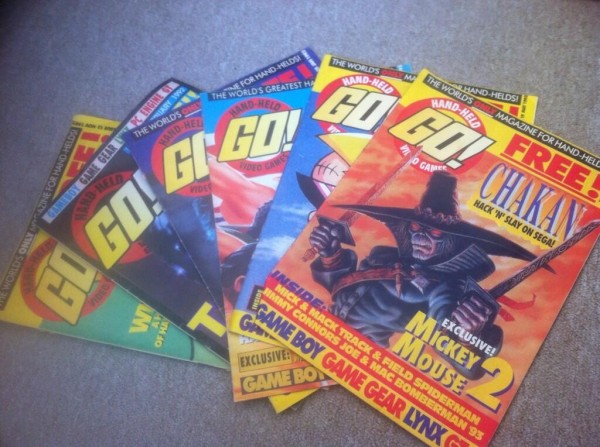 Also present around this time was Go! magazine that came free in the middle of CVG. Covering an array of handhelds, primarily Gameboy, Game Gear, and even Lynx and PC Engine GT from time to time, it was a great addition to the mag. In fact, one particular feature the mag once ran – a photo story of how the mag gets made – featured one particular staff writer called Paul Anglin who I found particularly cool and funny, and became the initial inspiration for my namesake character Dibbs. 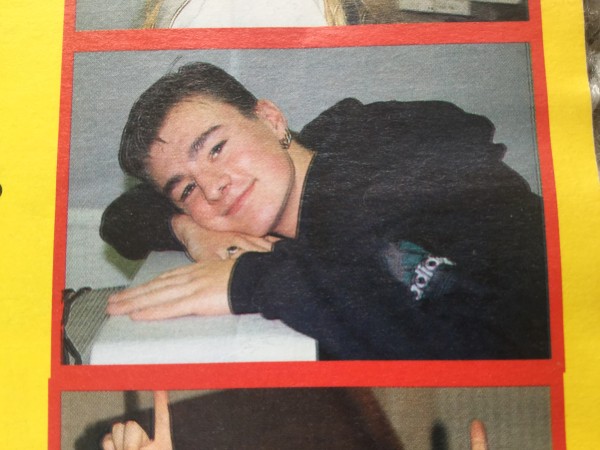 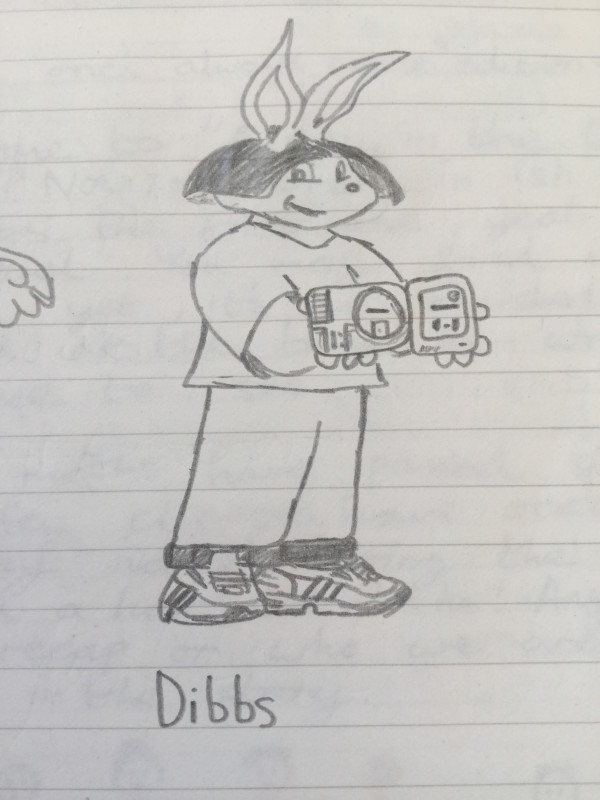 …and Ahoy ’93. I guess based more off of the role Anglin played rather than appearance.

It also inspired a li’l story I put in our old fanzine sorta mag, C.A.O.S, called A Day In The Life Of Us… which could be making a long awaited return to this very blog with its third iteration this year! If I can be bothered/have time. Which basically means it won’t. But I have written most of it already so who knows!

The awesome Streets of Rage 2 issue 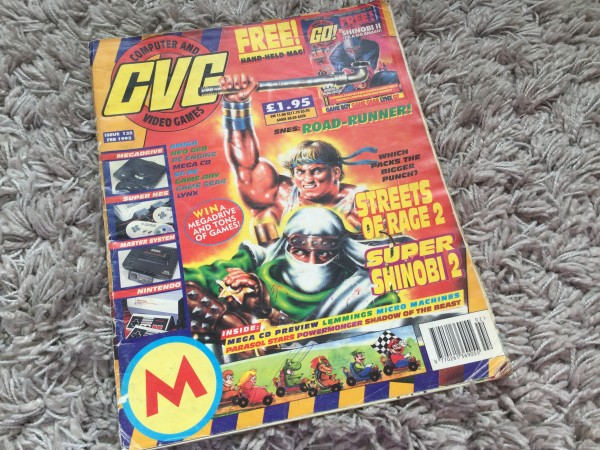 This bad boy was one of my all time favourites, and as you can see, I’m still in possession of this beast! Stars of the show were Streets of Rage 2 and Shinobi 3. I sat and pored over the review for SoR2 for hours… HOURS I tell thee… even taking it to school to show all my friends, and convincing Wayne to get it for his birthday which was our first experience with this £45 16-meg heavy hitter! 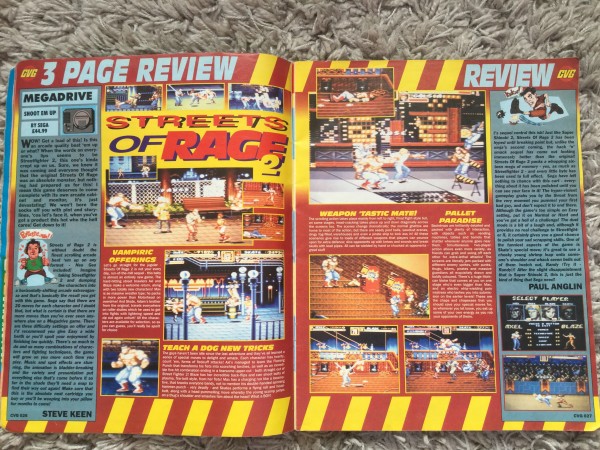 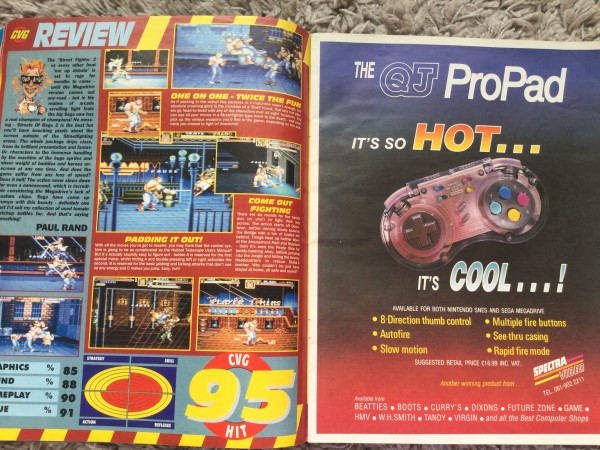 Ninety-five percenta ahoy! Plus a bonus SNES pad ad for you to enjoy.

This was around the golden times of Hannah, Lydia and Fiona too, and when I think back to those days I can still remember the hopeful optimism in the air inspired by those hot girls and this issue of the magazine. Oh to be young and sad again! Although I still have the sad part down to a tee. 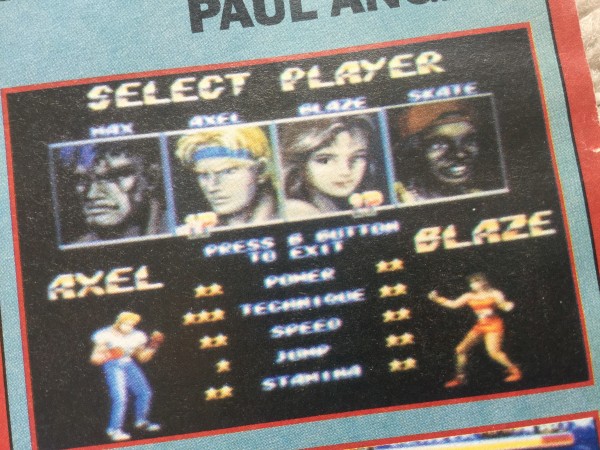 Shout outs to Miss Gatehouse who’s probably well past middle age by now since it’s been 22 years. I always thought you looked like Blaze in this portrait pic. Oh, and thanks for your science classes. I’ll never forget what you taught us about the periodic table… wait. That’s not right. I’ll never forget how hot you were. Ah, that’s better.

Around the middle of ’93 I think it was, CVG underwent one of its regular stylistic changes. Cue the launching of a much less chunky iteration of the mag with obviously far lower quality paper much akin to the vicious tracing paper-esque loo roll lavished on only the finest of school toilets of the era. 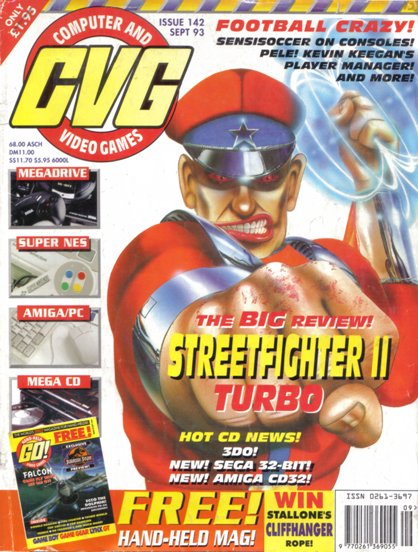 The inspired steam given to the magazine by the now departed Rignal seemed to be ebbing away slightly, and this was personified in the mags new diminished pamperings. It didn’t feel nice to hold, and I seem to recall it also had a weird odour. Occasionally devoid of several key news stories which I remember I found disappointing, it was also becoming a little barren of the character that it had before. Still, it was still better than any Future Publishing tripe on the market. Funny, in retrospect, that Future now own the CVG brand and are finally putting it to rest in a way they could never do back in the day with their own competing gaming mags.

With 1996 swinging into action, CVG had undergone another make over for the new generation of 32-bit consoles. 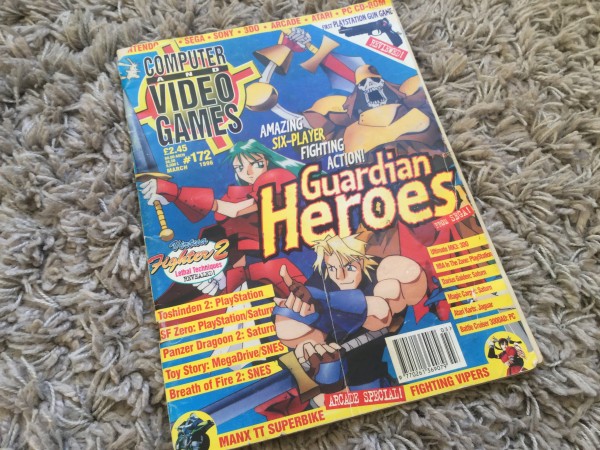 This issue was one of my favorites and i have great memories of reading this. Plus, it’s one of the few remaing magazines to survive my foolhardy cull many moons ago when I decided games were no longer for me. Grig head! Chock full of awesome fighting games, particularly on the Saturn, this was a hype-bringer of an issue!

Check out this awesome array of Saturn games that were on the horizon! 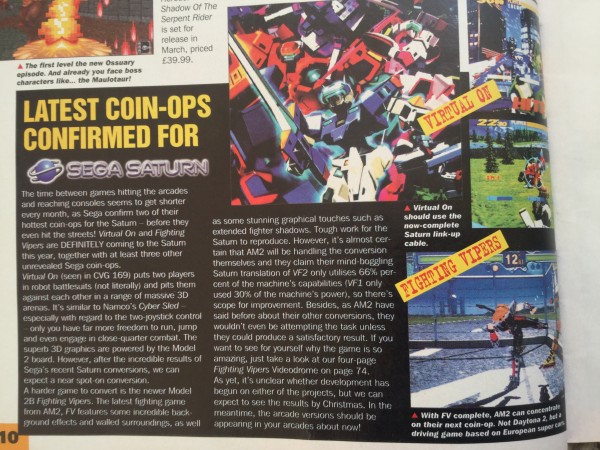 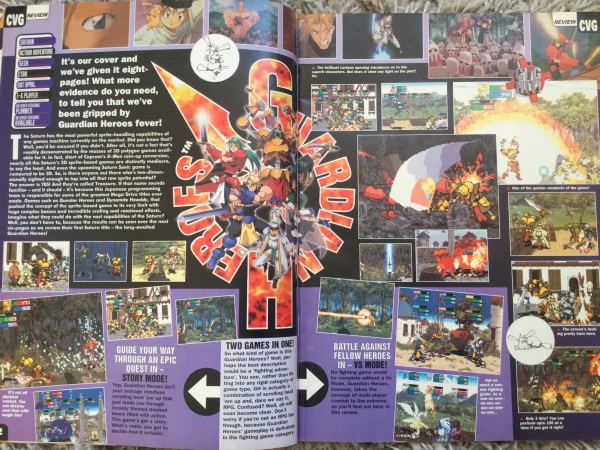 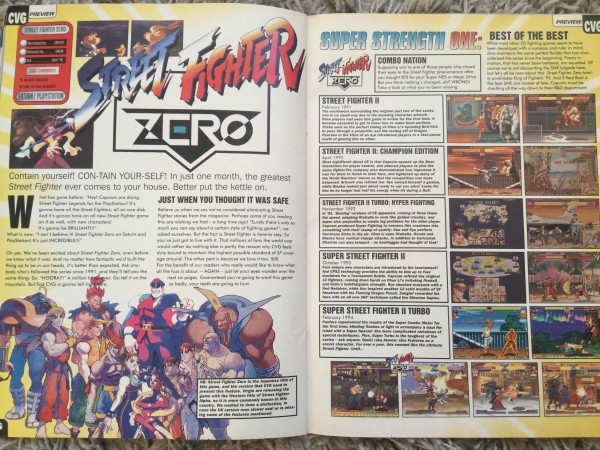 Oh, and there was a bonus bit of news too that had me bouncing off the walls! 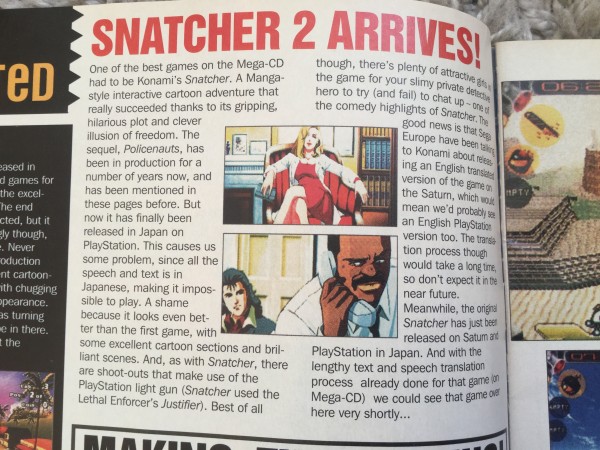 Course, typically this turned out to actually be Policenauts, which although revered in its own way, both wasn’t Snatcher 2 and didn’t come out in the west. Sigh. But still, prior to knowing this, the hype of this moment was real! 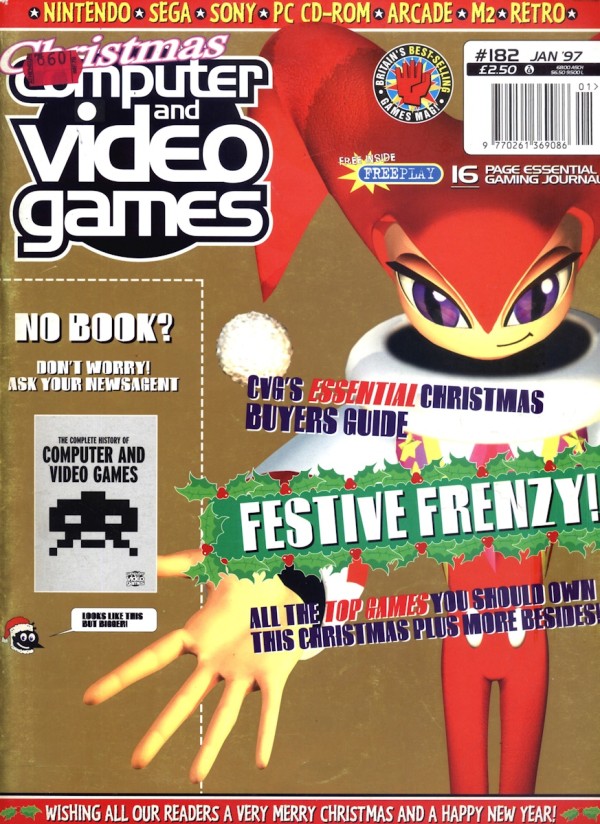 Nights ahoy… hold up! I still have that free book with the Space Invader on it!

Another fine issue starring Segas legendary Nights for his Christmas version of the game. Restoring the paper quality to far greater standards in this iteration, I believe it was this issue (or thinking about it, maybe the one before) that actually broke the news of the coming Christmassed-up version of Nights. Stopping me in my tracks just prior to buying Fighting Vipers on the Saturn, I instead then waited for the deal to come into play whereby you would receive Christmas Nights free if you bought one of Segas flagship games. It was a little confusing whether or not you had to buy just one or two titles, and even on launch day I remember standing at the counter with the store manager talking to the dude at the register, both confused as to whether they were supposed to let me have it. I certainly wasn’t leaving without it though, and with the manager being a bit hissy, I wrangled it from those buffoons and had a very enjoyable Christmas with it, thank you very much! 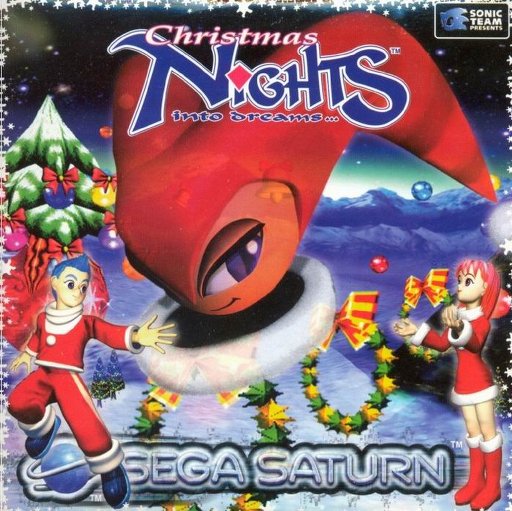 Still, that wasn’t as hardcore as fellow Grigadier Lartens, who took his dedication to Nights to the next level by purchasing Daytona CCE and receiving his free Christmas Nights… even though he didn’t even have a Saturn yet! Respect.

Anyhoo, the rest of the mag had some other non-Sega stuff in it – some machine called Playstation or something seemed to feature I seem to recall, but whatever. Christmas Nights baby! Woo!

Around this time there was also a cool li’l innovation in the mag where they used far cheaper less glossy paper to create a section in the mag called Free Play. 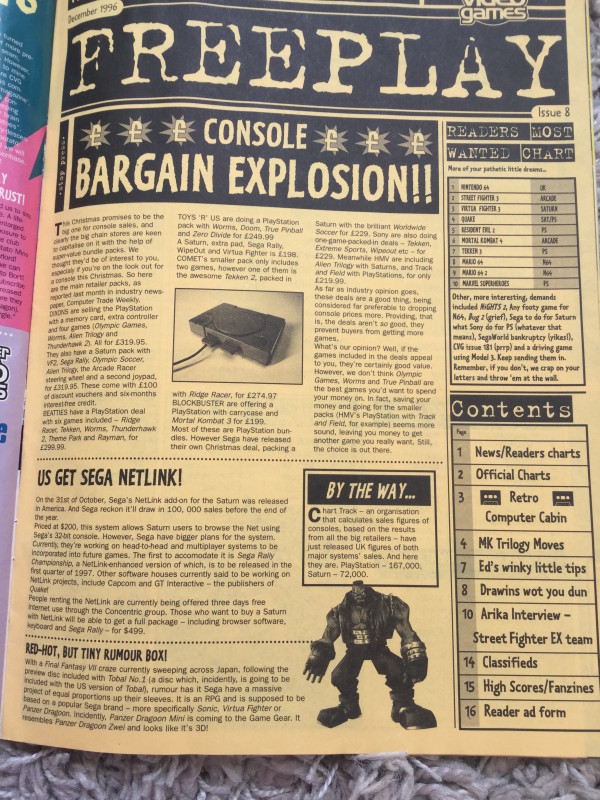 I seem to recall them explaining they could get more pages into the mag with its cut down paper quality and black and white design. This was fine by me as this section was actually good, and even became one of the main parts I spent most time perusing. Let’s take a butchers! 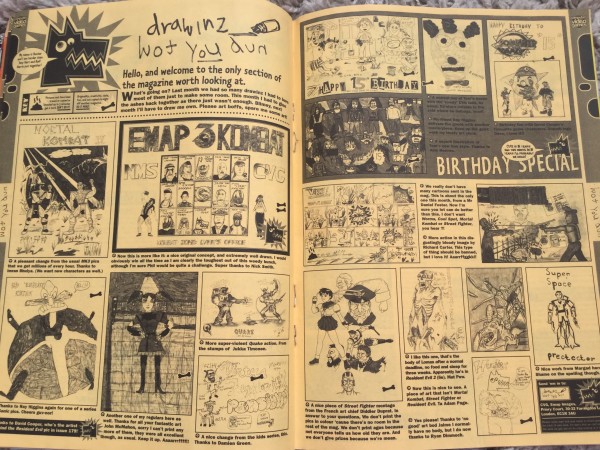 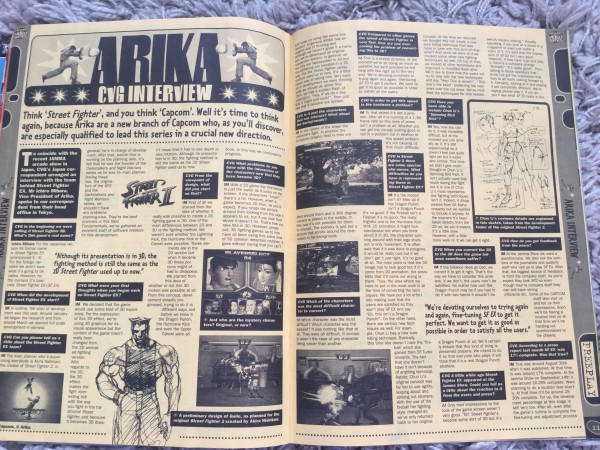 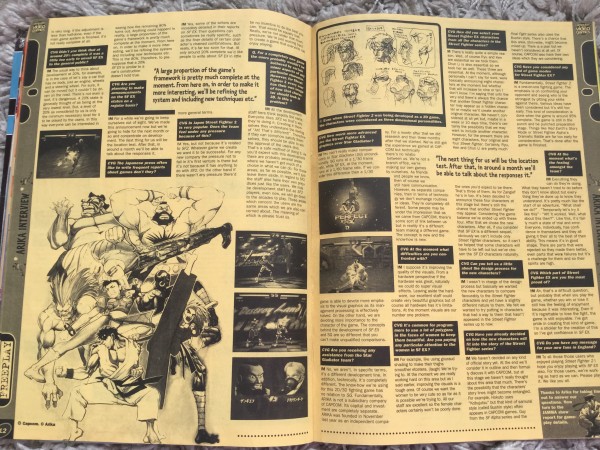 And the other part. Nice design drawings!

After 2000 hit, things seemed to be winding down a lot at CVG. It got a little stale, boring even at times, and all the fun seemed drained out of it. Whether or not this was personal to me as my main machine, the Dreamcast was in its commercial (though not long term as far as fan support and innovations go) death throes, and the entire industry was basically in Sony’s hands, I don’t know. But things were just starting to feel a little lifeless. 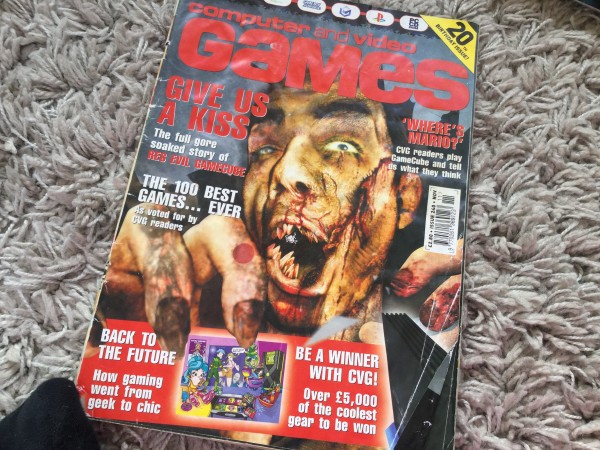 See, even this. It just looks… dull. Sigh…

I still read it, sure. But the glory days were gone. I took their reviews seriously, I checked their news, but the Internet was in full force by now, and the buzz of ‘First screenshots inside!’ were being replaced by being able to actually watch lengthily gameplay videos of upcoming games.

I don’t even believe I was still around when CVG magazine finally succumbed to its fate, and I certainly don’t remember the final issue as I did when Sega Saturn magazine bit the dust. But I guess sometimes the things you were once into as a kid get away from you, and it’s only later on that you regret missing out on the end of certain eras. I suppose though, in a way, I never really believed CVG, the longest running video game media brand in the world, would ever disappear. Despite the many legendary tomes that fell before it like Mean Machines. CVG was just… a stayer, I thought. 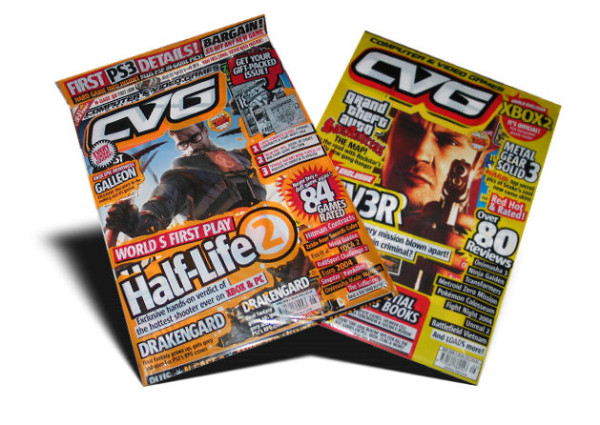 It’s surprisingly hard to find pics of the final few issues of CVG. This is definitely one of the last from 2004.

Anyway, there ya go. As one chapter ends, another one begins. One, er… without CVG. At all. What am I going on about? Who knows. But what I will say is that when the good ship Grig Orig finally founders, I expect posts similar to this spread across all corners of the Internet such would be its earth-shattering impact! But until that day, let’s just doff our hats to the marginally lesser loss of CVG in respect of this once great behemoth.

Thanks for the memories. ‘Twas a fun ride.

1 Response to CVG Shutting Up Shop