Good day my Grigglings! Next up from the 2013 left overs from Heir Ahoy is a 1987 bad boy that got a fine playin’ when I was a kid. It’s a retro review of a retro game, which means for double retro action! Or something. Anyhoo, here we go!

There was once a time when your everyday average Joe Packer was not easily privy to such luxuries as a Nintendo. Whilst stats like ‘Every one out of two households in the US had a Nintendo’ were bandied about in the late 80’s, over here in the UK it felt to me like there was perhaps about 3 Nintendos in all of existence – one in Boots, one in Rumbleows, and one at my friends house. Yeah. That spawny get always had everything.

As the adverts hit our screens informing me I needed a NES and it’s Johnny 5 looking companion, the hype began to grow. Naturally my friend had the lot – in fact, his Dad bought him a second backup NES (Turtles bundle i recall) in case of hardware failure so their substantial software investment would not go to waste. He perpetually tried to convince me to join him in this NES-infused era, but it was not his attempts to sway me that were holding me back. It was more the new president Nintendo were setting in pricing – and £40 per game was a far cry away from the meagre few pounds i was accustomed to coughing up on the home computers of the day, not to mention the cost of the actual machine itself. All in all, a jaunt down Nintendo Street plus my nonexistent financial firepower would mean that I could afford roughly around one game every 12,000 years or so.

I was defeated. Skulking away from my friends house whilst dragging my feet all the way home with the jingly tones of the Mushroom Kingdom ringing in my ears, I realised that the joyous likes of Nintendo and their fancy games were for the privileged few only, at least for the immediate future. And i was not one of them. Sigh…

But what about the rest of us? Sure, I had my C64 which had seen many hours of use over the years – usually involving me craning my neck over the cassette window seeing how far along the tape had run before the harrowing realisation of another failed load crushed my soul.

Step into the fray a rather unexpected bolt from the blue, the undoubtedly copyright infringing The Great Gianna Sisters. My Dad had managed to source a copy from one of his dodgy mates and I approached with apprehension.

I popped the game into the revolutionary floppy disc drive he’d also acquired off of the same mate, serial number no doubt long since scratched off. Within a few fleeting minutes, I was whisked off to a virtual land that looked ever so similar to a certain moustachioed plumbers adventure, except with these oddly coloured female sprites instead. It was the Mushroom Kingdom, except… it wasn’t. 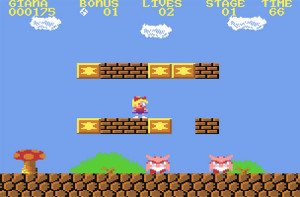 I never had seen such a game on my humble C64 and was half expecting the old girl to start spewing black smoke at any second as it churned out the NES-esque graphics!

I didn’t know what the legal implications of such blatant plagiarising were, nor did I care. Whatever this was, it was gonna get played. Hard!

Whilst The Great Gianna Sisters could by no means hold an illuminated knat’s rectum to Super Mario, let alone a candle, it was a sterling effort from the developers. The hat doffing extends to almost every facet of the title, from the distinctive music that I can still hum 25 years later, to the level design and solid if slightly plodding and floaty gameplay.

You start off with your standard character, hair groomed nicely and tidily swept back. That’s until you collect your first power up – a rolling beach ball freed by head butting the underside of elevated blocks that is essentially the equivalent of picking up your first mushroom in Mario, except without the defensive qualities of allowing you to take a hit. No sir! You get hit in Gianna Sisters and you lose a life. Collecting said beach ball transforms your character into a crazy haired version of its former self (for reference, picture Axl Rose circa 1987) and acts as a stepping stone to subsequent upgrades that offer your character the ability to shoot at your enemies or pause the game clock momentarily. The wealth of upgrades afforded to the player continue as you progress, however, quite what they do I couldn’t tell you as they don’t seem to make any notable difference to your characters abilities. But they look very nice. Which is lovely. 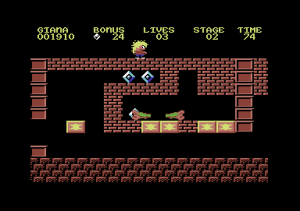 Gameplay wise, the two run speeds of Mario afforded to it by holding and releasing the run button somehow slipped through the rip-off net and meant that the Gianna Sisters ran at one speed; slow. The characters are very sluggish and weighty on the ground, and overly floaty in the air. The amount of joy sticks I went through with this game was incredible as I wrestled with the characters in my attempts to pull off the necessary precision platform skills as I fought my way to… whatever it was they were trying to achieve. All in all, what was essential for me was having what I’ve termed the ‘Need For Speed mindset’ after having the misfortune of talking to some mug who bought that game annually without gathering any info on the game or checking any reviews – in the back of your mind you’re disappointed and know the game sucks, but you don’t want to admit to yourself or anyone else it’s a piece of turd as its your newest toy. This was quite applicable to Gianna Sisters, but coupled with the fact this was the best platformer I was going to get, meant that the ‘Need For Speed mindset’ was not just advisable, it was a necessity. I shaln’t be too hard on this aspect of the game, the fact that they actually had some semblance of momentum physics at all lifted it above many other games of the era on C64. I’ll merely file this area of the game under the section marked ‘Could be better’ in the Grig filing cabinet. Sandwiched right in between the section dividers marked ’90’s pictures of Teri Hatcher’, and ’90’s pictures of Jet from Gladiators’. Giddy aunt… 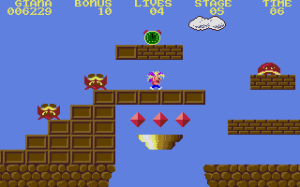 The levels are all essentially aesthetically very similar in appearance to (you guessed it… Sonic! Only joking!) Super Mario, and structurally like weaker versions of the Miyamoto masterpiece. To be honest, the games strengths in this department tend to be in the elements it’s blatantly stolen. The layouts of sections of blocks and enemy placements to identikit cheats like being able to head butt your way through low ceilings allowing you to jump up and run along the top of the level, it definitely pays to have a Mario mind set. Or perhaps it pays to have a Gianna Sisters mindset in Mario!

And thus we come to the end of our retro muse over a title lost in the recesses of time, and that peculiarly, has spawned an unimaginable rebirth with a recent slew of DS, XBLA and PSN titles that, as I understand, are relatively good. Perhaps we’ll get around to putting them on trial with the Griggish empire soon. That means review them, by the way.

Graphics: For the C64, it was head and shoulders above anything else I had, and gave the technically vastly superior NES a run for its money. Vibrant colours considering the limited palette and display limitations. Impressive. 85%

Sound: Another strong area. The tunes are bold and memorable, and although there are only a handful of tunes reused through the game, I’d give them a hearty thumbs up. Mostly decent, if a little scratchy, sound effects complement the action. 80%

Overall: A platforming trump card for the C64. What it lacks in gameplay, it more than makes up for in… well, plagiarising. Good. 70%