So my Saturn adventure continues, crashing through the stack of games accumulated from an era long gone by, and in a bid not to end up crying over how bad I am at Duke Nukem 3D, Sega Rally, and Street Fighter Alpha these days, I decided to start a new play through of one of gamings royalist members – the mighty Panzer Dragoon Saga. Inspired by the awesomeness, this is one beauty worth talking about! 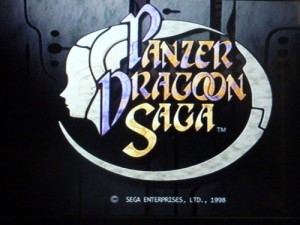 The game tells the story of Edge, a young whippersnapper seen at the outset of the game employed by the lands all conquering Empire as a guard. Edge is on duty at an Empire excavation as they recover artefacts and technologies left by a defunct civilisation known as the Ancients, the advanced technology of whom, a lot of the current day gizmos are based. Airships, weapons, vehicles, you name it, it’s all founded on discoveries from the super-advanced times of the Ancients. Edge looks on as a mysterious girl is hoisted out of the dig, but before things get too intriguing, Edge is having his ayne kicked by some Grig head called Crayman and his cronies as they descend on the area and start smashing the place up. Edge falls into a raviene in the process, landing softly in a lagoon, and stumbling upon a strange new ally – a powerful dragon, which seems to be at his beck and call. The pair head back to the surface finding the place in tatters and with Edges boss slain and the attacking fleet having disappeared into the distance. Cue Edges conquest for revenge with his new pal, and ultimately much Dragon-shaped butt kickery of the highest order. 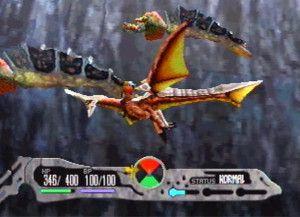 Edge, ridin’ dat Dragon. Or Dragoon. Whatever that is.

Launched in 1998, Panzer Dragoon Saga was one of the last great hurrahs for the Saturn. Coming late in its life, few copies were produced leading to shortages as they were all quickly snapped up eventually prompting Sega to whip up secondary batches, at least in the U.S. Still, this did not stop the game from becoming super-rare. In fact, even on launch day here in the U.K, there was a distinct lack of Dragoonage in the shops. I believe me and Lartens managed to pick up both available copies in our nearest town. Just in time too, as some dude on the phone to the store worker was just about to have one of the copies put aside, ’till the employee clocked the boys from Grig Orig rocking both boxes in the queue. Ain’t nobody getting one over on the G.O.-bots!

With Final Fantasy VII putting an RPG-coloured fire in the bellies of gamers worldwide, Panzer Dragoon Saga stepped into the fray – albeit, a li’l too late to save the Saturns hide – but what a game they gave us! 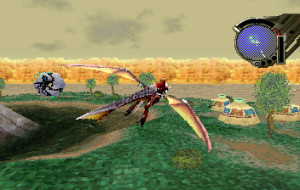 Eat my Dragon! That tree better look out, coz it’s about to get buzzed worse than The Grigs naughty bits after he found those lice.

The gameplay is your standard RPG-style fare for the most part. Exploring towns, talking to folks, running errands, you know the drill. But where Final Fantasy and the like shot for prerendered backdrops, Saga took the full leap to 3D. 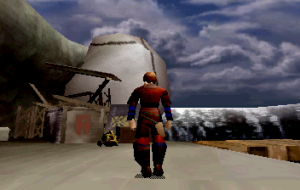 Edge, hitting up the town. Where’s KFC? I’m hungerin’ for a fillet burger, and you grigging know I’m gonna be towering that sucka up!

This gave the game an added depth of immersion, leading to a real sense of being in these places and eventually knowing them well enough to find your way around after you’d previously scoured every nook and cranny for secret goodies so often stashed in the shadowy recesses. In fact, as simplistic as it seems these days, I still find it amusing that Square Enix actually used the excuse that its too hard to make fully 3D explorable towns when questioned over their lack of inclusion in Final Fantasy XIII. They had them on Saturn you mongers of buh! Giddy aunt. 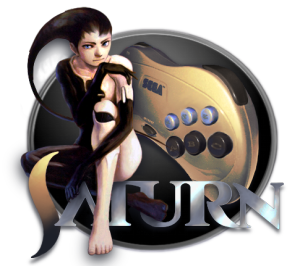 That’s either one big Saturn pad, or a very small girl.

It is however, the battle system that shines in this game. I had never really seen such a system implemented in a RPG before. Aloft your dragon-steed, you rotate around your deadly and often gargantuan enemies, attacking with strategy and precision, gradually figuring out where and when to hit them, and trying your best to stay in safe areas to minimise damage. The 3D rotational grid you move on around your enemies really gives the game a unique feel, and was a nice change to the typical sets if parties facing off in a turn based showdown. Not that I have a problem with that scenario, what with the earlier Final Fantasy games being some of my most favorite videogames. I just enjoy and appreciate how Saga does things differently.

The graphics are pretty good for the time, though perhaps not quite of the ilk of Zwei, but certainly some of the larger more detailed crafts and enemies you tackle boast a sense of awe, truly making you feel up against it in your striving to take them down. The areas you explore are upon your dragon area also well done, nicely rendered and with a decent enough draw distance to ensure you’re left to explore the mysterious settings with intrigue, rather than distracting thoughts prevailing about dodgy clipping and pop up. 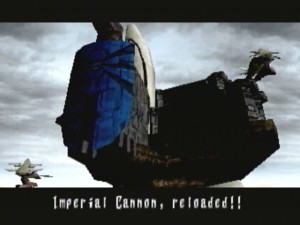 Our namesake! Shout outs to the big Grig Orig!

Credit must also be given to the games sound, which features a distinctive soundtrack immediately identifiable as Panzer Dragoon, and really stamps a memorable feel on the game. It just fits so well, elevating the scenarios with which its used to greater heights and giving the game a real cinematic quality, the like of which you seldom tended to find on the humble Saturn. From pounding battle music, to gentler melodic towns music, there’s not an area to be found where the music doesn’t excel, whilest the fully voice acted – albeit Japanese – voice track is also a commendable touch really adding to the unfamiliar mystique of the strange post-apocalyptic realm of Panzer Dragoon.

I guess if there’s any downsides, it’s that the FMV cutscenes are a little on the distorted side, coming off as very blocky looking. This was quite weird to me, as there were far better examples of crisp video much earlier in the generation, but if you look past it as best you can to focus on the story, it’s not too disappointing. The resolution in-game is also perhaps a little lacking, and some of the effects and animation are a bit clunky. There’s just a little bit of that lovely sheen missing that other games of the era were able to deliver, particularly on Sonys rival format. Course, the developers were up against it with the Saturns problems in some visual areas. 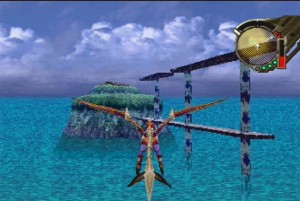 Nice water. Better hope it’s not the South Coast. There will be loggage.

This may come as both a shocking, and more importantly, disgraceful notion – one that I once would have spat at the utterance of back in the day – but I did wonder upon my recent playthrough, what this game may have looked like on Playstation 1. The constant use of cross hatching in place of true transparency effects took me right back to the days where that one particular PS1-trump card was constantly coming up in any Saturn vs Playstation debate, and it was a bitter pill to swallow. In fact, even when playing Final Fantasy VII earlier this year, I recall musing at what a Saturn version of that game may have looked like as the summon I watched threw colourful transparent polygons all over the show in a haze of technicolor brilliance. The ugly meshwork that would have been on display on Segas 32-bit behemoth would be more dotty than Spotty Mans pebble dashed under-crackers. ‘Tis clearly something that haunts me to this very day! 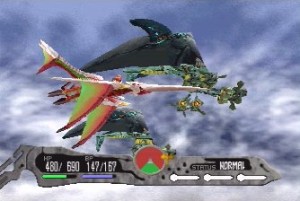 It might be a crosshatched nightmare at times, but Grig it. If it doesn’t look grand in its finer moments!

But still, let’s not worry about what Panzer Dragoon Saga isn’t, and instead focus on what it is – one of the most awesome games of the 32-bit era, and a game that is held in great reverence among gamers still today.

In fact, it’s a strange situation that Sega hasn’t rereleased this game on PSN and Xbox Live, as you think they’d be tripping over themselves to do so. I mean, they actually released Streets of Rage 2 twice on XBLA; once as a standalone title, once as part of a package containing all three games. Surely they’d be itching to get the Dragoon on there too? And indeed, they probably would have, had it not been for another E.T.-esque nugget of gaming folklore.

Y’see, the story… or legend, as I now want it to become… is that Sega lost all the original code for this game somewhere deep within the belly of Sega H.Q in Japan. Thus, there is not really any potential to put the game out again, unless they built the game again from the ground up, which Sega certainly wouldn’t do. It’s that kinda thing that gives the game an air of mystique, while the incredibly inflated prices it goes for these days puts it out of the reach of many giving it near untouchable status except for the precious few. Thank goodness I got that sucka on launch day, or I’d certainly be Dragoonless!

Except for if it’s been emulated. Which it probably has.

So to conclude, Panzer Dragoon Saga is to me well worthy of the prestige that surrounds it, closing out the Saturns final few chapters with dignity and grace. Now, time to get back to Duke. That games been holding my ayne for a while now. Must be time to get it handed back to me…