While games makers are becoming well accustomed to posting yearly drops in profit year in year out of late, there is an even more perturbing observation to be made regarding Segas recent financial results.

Their best selling games, are all a bunch of Grig.

Sheesh. These are Sega’s best selling games? The house that built Streets of Rage, Panzer Dragoon, Daytona, Shenmue and so on? What… what happened?

Whilst the foolhardily exclusive Sonic The Lost World may have been widely, and probably wisely panned, it would seem to suggest that the hapless-hog can at least command some kind of respect and bring back the punters, no many how many crap games he’s been in. Those schmucks… whom I will be joining if I ever get a Wii U. But I digress. 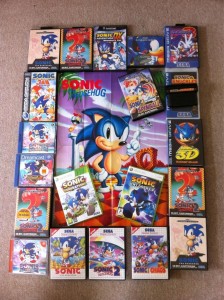 An old shot of my Sonic selection. I actually have more than this now. But owning Sonic Unleashed negates any good additions should I take a new photo.

What’s this Rome game? Last time I remember this game was years ago, my friends flat mate playing some previous iteration and shouting things like ‘Their ramming my rear guard!’, and so on. Looked dull as Grig. Didn’t even know they still made it. Not that Sega actually made it. They acquired it in some publishing deal several years ago, I seem to recall. I could almost weep. Streets of Rage 4? Nope, here, have this. Grigging A… Course, we won’t be completely ignorant and totally write it off. It could be good. It’s just it isn’t Shenmue 3, therefore it must be crap. And that’s a just verdict. 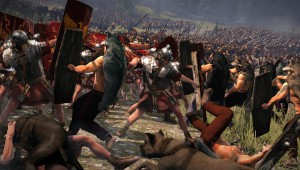 So Rome, huh? Must be a right tip, which is why they had to try and invade everywhere else. Although sometimes I do feel like I’m a person there. Especially when I think about how Sam Beckett never made it home… #ijoke!

And Football Manager. Grigging what? They still make that game? It’s like a bunch of writing! I’d rather read a book! No wait, I didn’t mean that. Unless… Retro Gamer counts as a book, right? Anyhoo, I know I’m out of the modern game loop somewhat, but come on. I never got this one. And I did once try. I also once tried dropping in on a skateboard ramp when i cant ride one and hurt myself significantly. But that was a favourable experience to playing Football Manager. And yes, I am well aware of the fanatical following it has. It’s just, how can this be at all interesting? I can just about stomach a match of FIFA where you actually play the match, not that I’ve bought that turd-fest for several years. But this? Sega, what has become of you?! 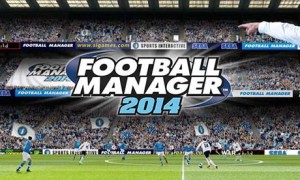 What seems to be the title screen. Probably the most interesting and graphically intensive part of the game.

While the Sega of 2014 is in no way the Sega of old in anything more than name, any good they once embodied giving way to a maelstrom of crap and then some, there’s still a small corner of my greyed out heart quietly mourning for them.

This is a sad illustration of what Sega has become. And I am a Sega fan. Yet I have zero interest in anything they’re doing. ‘Cept dat Sonic thing, but let’s gloss. Publishing other companies games and letting their own I.P’s rot might be keeping their heads above water, but it’s not a pretty picture. Clearly I have a minority desire not worth tending to, what with wanting their more traditional games being given a new lease of life, but if that’s the case I’ll have to dwell as one coz I ain’t budging! And until they get their act together, I’ll be reliving the retro joys of years gone by. How could they have become… this? I mean, clearly the fact that these are their most popular games also says a lot about the games buying public, and likewise, how can the gaming community have become… this? Sigh. 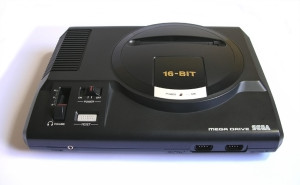 Shame on you, gamers! Angry Megadrive judges you! Grrrr!

It’s all too much! I’m too upset to face the joyless future of F2P shovel ware, poisonous micro transactions, and the impending demise of the traditional console! I’m done… I’m just… done.

Luckily for the industry I can’t buy games anyway, otherwise I’d really be sticking it to them. Or am I already doing that? Whatever, I’m retreating back into my cave to play Megadrive by candlelight! Goodnight!

This entry was posted in Dibbs Ahoy. Bookmark the permalink.