Yep, I’m doing ANOTHER post. That’s two in one month, and we haven’t seen that kinda action around here in quite some time. Well, I thought I might as well do something productive since all I’m currently doing is manning the basement door here at Grig Towers waiting to admit The Grigs girlfriend – er, Urethra Franklin – into his cell for another visit. Dread to think what they’re getting up to in there, especially after the curious deliveries they’ve had recently. A Big Jim diving suit minus the bottom half, 106 ‘heavily-thumbed’ used copies of J.D Salinger’s Nine Stories, an industrial grade leaf blower, and seven lorry loads of cement don’t paint a picture I could even fathom a guess at, let alone wish to see. But while I’m just sitting here, I may as well scribe, if only to try and block out all the weird noises coming from inside (Y’see I say that as if I just wrote this, but just for some behind the scenes buh, this post is actually pretty old. Still, time to unleash it on the world!).

The beginning of a new generation of consoles is always an interesting time. The reaction to the usually excessive price, the furore over there being no games to play, and the confused prods in a myriad of directions developers try out with the new options available to them are all intriguing to witness. It’s all part and parcel of the new machine experience. The Mega CD was one such example, and while not neccessarily a new gen as such, the powerful sprite scaling and rotation chips were great for the time, allowing for some impressive SNES-style shenanigans to be implemented. But it was the huge leap in memory availability was a bound of unbridled significance. 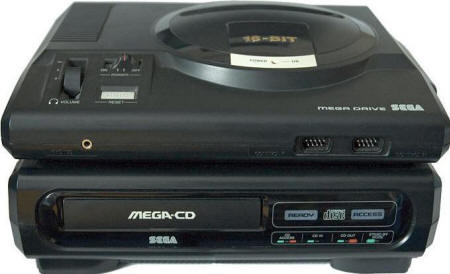 The Mega CD. An absolute Stallion of a machine, but who could tame this unruly bronco?

The brave developers who took up the challenge presented by this new beast waved their arms around in the dark, desperately hoping to find their way. Some achieved this to a degree. Thunderhawk was a sterling example of something that arguably could have only been done on Mega CD, at least to such a standard, and the pretty much arcade-better conversion of Final Fight certainly put the three-sprites-on-screen-character-dropping-multiplayer-devoid SNES version well in its place. Plus it had Snatcher, which as any regular Greader will know, is one of the best games of all time.

But what of the other efforts? One way of filling up all that extra lovely space that game makers far and wide stumbled upon, fairly early in fact, was the use of Full Motion Video, or FMV, thus leading to the advent of the FMV game.

FMV games used memory sapping digitised video footage and sound that would far exceed the limitations of cartridges leading to a glut of titles that were riddled with it. There were several flavours of these games. Some were of the more leisurely variety like the famous Night Trap where it was all about keeping an eye on what’s going on, strategically setting traps, and flicking between video feeds at the right time, rarely relying on reactions. Others however, could be likened to Quick Time Events these days in how they operate, i.e. watch the game playing what’s effectively a cutscene until you’re prompted to interact with well timed button presses. Except in the Mega CD days, they weren’t really cutscenes that crop up every now and then to progress the story. They were the game.

From Mega CD pack-in titles like the anime flavoured Cobra Command and Road Avenger, to Sewer Shark and Tomcat Alley, there were many who tried their hand in the field. But were any of these games actually any good? Have a seat my obsequiously gallant Grigadiers of the Grigmungous order, as we take a brief look at some of the games that broke through their developmental shackles to break out the other side and find their ways into our homes.

Well, let’s not mess around and cut right to the chase. Night Trap. Yep, the game that sparked a whole lot o’ trouble all those years ago, and which, along with Mortal Kombat, lead to video games receiving age certificates in the vein of movies. ‘Sfunny really. The game was about as convincing as an episode of Top Gear, and if you can believe it, even worsely acted. In fact, the only thing scary about this game was the crazy fuss around it, with the press jumping in at every potential opportunity to herald it as the thing that will finally push the youth of the day over the edge. 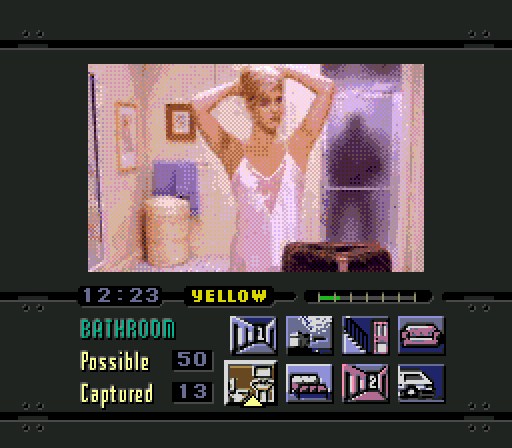 Course, the thing that they actually should have been focusing on is the bizarre Night Trap song the girls start miming to for some strange reason near the beginning of the game that truly is so bad it’s almost goes all the way round the crap spectrum to become good again. With this song in mind, I’d have argued that the fifteen certificate the game was awarded was lenient in the extreme.

Now I never actually got to play this game back in the day, but I was aware it was treated with some level of prestige, possibly even skating around the notion of being decent. Can’t say for sure if that’s true, but what I can say is that it plays in a similar manner to Night Trap. So chances of that being true are thin on the ground. 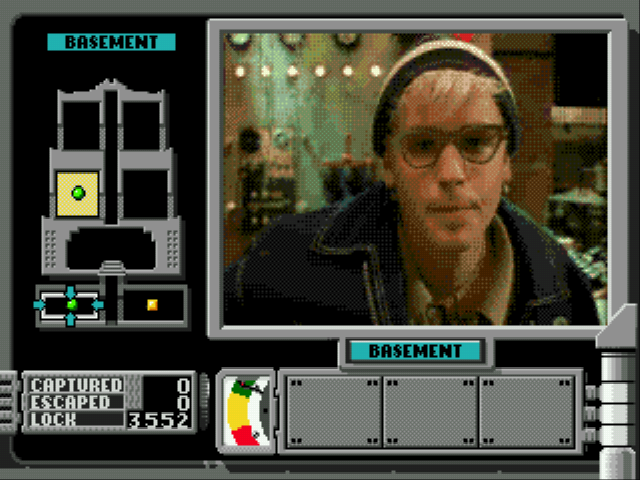 Anyhoo, starring a character called Eddie who has been locked in the basement of a building, you are to flick between a selection of cameras while setting traps all over the show. Sounds a bit like The Grigs current situation here at Grig Towers. We’ll be sure to keep any and all copies away from him so as not to give that monster of iniquity any ideas. 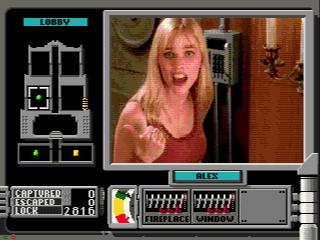 With higher production values than Night Trap, apparently the main criticism levelled at the game was that it was too hard. Better than getting called too crap, I guess.

There were some interesting anomalies with the Mega CD, and one such title that you wouldn’t necessarily consider an FMV game was space-shooter Silpheed, which seemed to show the Mega CD pumping out incredible amounts of polygons and throwing them round like the basement bound The Grig does with poop in one of his particularly noteworthy dirty protests… until you realise it wasn’t doing anything of the sort and was just streaming video of said polygons behind your controllable ship that was layered over the top. Sneaky! 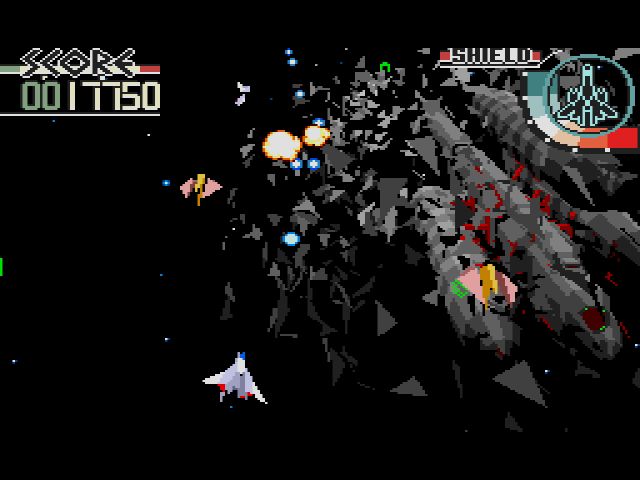 Yep, it’s a shooter. But this game had FMV coming out of its ayne!

There was also the release of the impressive Dragons Lair, which upon its late 80’s arcade release, was probably the goal post marker for this type of game. 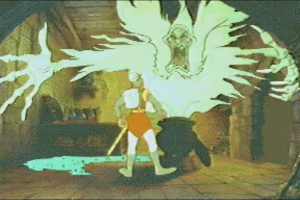 With its voluptuous cartoon graphics and awesome dramatic sound, it was basically as close to an interactive cartoon as you were gonna get back then. And while the Mega CD version had more than a slight tarring of the ol’ grain-o-vision brush, it was still a wonder that this game had made it into the home in its original guise, rather than the awful NES adaptation where it had become one of the worst platform games known to man. I own it and can attest to the buh. 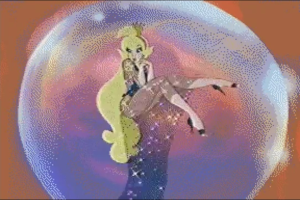 Time Gal was a good one. Well, in that it looked good. The actual game was a pile of Grig, but it had that awesome looking late 80’s anime flava down to a tee. Taking control of the shenanigans of the time-travelling temptress, Gal, or whatever her name is, traversed the circuits of time, hitting up many a period (hee hee! Period!) and taking on an assortment of adversaries as she strove to save her scantily clad hide. 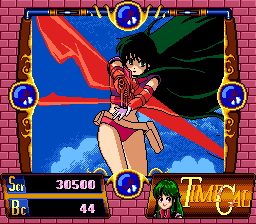 Whilst it looks quite good, with the cartoon graphics using simpler and flatter colours allowing for a marginal drop in the usual graininess found in live action FMV, the gameplay is left wanting with confusing scenarios and so fine a line between what you should and shouldn’t do it can often leave you wondering what the Grig is going on. Close, but no cigar. 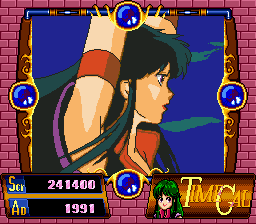 Rebel Assault was an interesting one. Up until this point, most FMV games on Mega CD were grain-fests of washed out colours due to the seemingly bizarre issue of still sharing the Megadrives very limited amount of colours on screen. New tech was called for, and so Sega developed new rendering methods that allowed for more colours and a bigger FMV display window. In fact, after a brief Griggle search, I can find nothing on this but I distinctly remember it at the time. Another lead for Grig Orig to track down lost in the annals of time! Anyhoo, Rebel Assault was the first game to bear the fruits of this labour.

Converted from the PC original, Rebel Assault sees you controlling your usual assortment of Star Wars flavoured vehicles, taking down the Empire, and generally kicking Imperial ayne all round the galaxy. ‘Twas a fair crack of the whip, though the Mega CD version came off as slightly lacking compared to the PC original and even missed out a few chapters due to the developers being unable to overcome some of the constraints of the system. Me and Lartens had a pop at it a while ago (note: I think I wrote this article about 2 years ago, so it’s now probably a heck of ‘a while ago’)… think we were done in about five minutes. So it’s still got better lastability than a modern FIFA title. 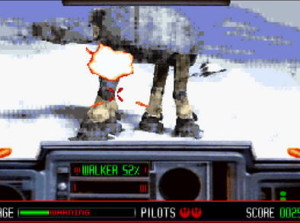 So that was our merry jaunt down the FMV Mega CD memory motorway. While these games missed the mark for most people, there were undoubtedly some awesome games for Mega CD. Usually not of the FMV variety of course, but they were definitely out there, despite the relatively bad rep the machine still seems to have these days. I certainly never regretted buying one and had way too much fun with it to give a crap about all the people talking buh about it. From Snatcher and Thunderhawk, to Batman Returns and Sonic CD, and the earlier mentioned Final Fight CD to name a few, there were plenty of titles to get stuck in to. And that’s not counting some of the gems that snuck past me, such as the Snatcher-esque The Space Adventure and (somehow) Shining Force CD, which I’m surely gonna be checking out at some point! Anyway, we’ll get round to all those games in a future episode of Grig Orig, same Grig time, same Grig channel! But for now, toodle-doo!