All this Master System reflecting japery has lead me to reacquaint myself with a bizarre yet reasonably cool occurrence in the world of the 8-bit Sega behemoth.

So while all the world was opening their doors wide and inviting Mr NES in to their home, offering him a handsome cuppa and cracking open their finest hobnobs, Mr Master System was left a little out in the cold. Sure, it did ok, particularly in Europe, but it never had quite the same impact commercially worldwide as Nintendo’s offering, the comparably limited software library reflecting this.

That was unless you lived in Brazil.

For indeed, ’twas quite the welcoming that the aforementioned country rolled out for the Master System where it was bizarrely absolutely huge and ran for many more years than anywhere else in the world, seeing off the advent of 16-bit machines as if they were nothing more than flies buzzing around its glorious crown.

Tec Toy, the company that brought Segas machine to the Brazilian masses, certainly weren’t ones to rest on their laurels. Pushing the Master System hard, they translated games such as Phantasy Star and rejigged games such as Wonder Boy for their target crowd. In fact, such was the Master Systems popularity there were even seventy-odd Brazil exclusive titles that cropped up to keep owners going. This included… wait for it… their own Master System conversion of Street Fighter 2! 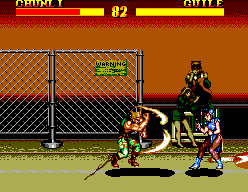 Yep, the game which back in the early 90’s when asked if it would ever come to the Master System, was met with raucous hysterics as magazines up and down the nation declared to those foolish enough to have ventured the question, ‘it will never come out!’. Officially licenced too. Shame the rest of the world never got it. Dang. 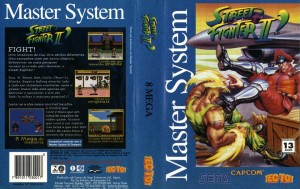 What’s even more incredible, is that it actually doesn’t look that bad! Yeah, its scatty as heck, collision detection seems nonexistent and the music is not the best representation of the originals even for the Master System, but still. Certainly a heck of a lot better than the C64, Spectrum and Gameboy ports anyway, even if the backdrops are as barren as E.Hondas fridge. Rarer than a good Coldplay song… actually, not quite as rare as that… chances of picking up a copy are not good. Rats! I’ll just have to stick with arcade perfection then. Sigh… 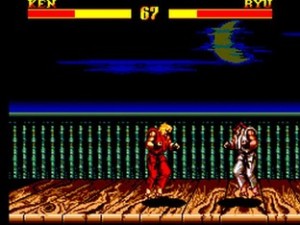 One Response to Master System madness!