Manga you say, yes, there is a Zelda Manga, a collection in fact 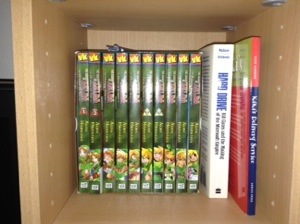 There is a ten book box set as seen above of Zelda in manga form, based on the video games the manga has some non-canonical elements but largely sticks to the events of the games, some parts are short and sweet whilst others are a little more involved with character, in the ocarina of time, Link seems to deal with dungeons fairly quickly but the interactions with the characters in between are enhanced a little more. One such non-canon plot point is Volvagia who Link buys as a baby dragon when Link was in his younger form, Volvagia is turned evil under Ganondorf control and Link is forced to kill him as an adult, obviously Link had to do this in the game but the emotional tie in wasn’t there.

The manga adaptions are by Akira Himekawa and include Ocarina of time, majora’s mask, oracle of seasons, oracle of ages, four swords, a link to the past, the minish cap, and phantom hourglass. The newer skyward sword can be found at the back of Hyrule Historia. 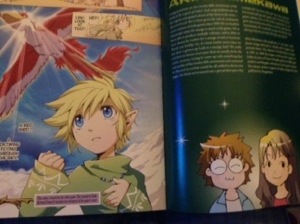 On the whole they’re a good fun manga whether you know the plot of the games or not, speaking as a fan from the Zelda 2 the adventure of link days, they absolutely do no harm to the franchise, and are generally well received by other fans alike.

This entry was posted in General, Manga. Bookmark the permalink.

2 Responses to Manga you say, yes, there is a Zelda Manga, a collection in fact