Ok, so since Bedgell has been such a good Grig-monger today, thought i’d better get in on the Grig action by rolling out another review of complete irrelevance. Let’s go!

When you talk about E.T video games, there’s only one that springs to mind: the legendary Atari 2600 version, many copies of which are still languishing in the rumoured landfill somewhere in the Nevada desert. But what’s this I spy? A PS1 E.T game? You’d have to be either pretty dumb, or pretty brave to return to this licence when making a video game. Or it could be good. Lets find out my Grigglings… 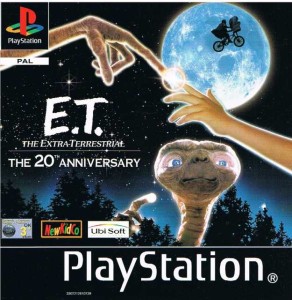 Now for some reason in my advancing years, I seem to be becoming more drawn to crap, like some kind of video gaming fecalphiliac. Quite why this is I couldn’t say, but upon perusing a local game shop and spying E.T on PS1, my inner monologue spoke thus, ‘That game is bound to be terrible. I have to get it.’. Before I knew it, I was at the counter, a shiny £2 coin in my hand fulfilling the asking price while the gentleman behind the counter rubbed his mitts in villainous glee at the fact that they were taking me for a ride. Well I say ‘nay!’, dear sir! For I will wring some drops of enjoyment out of this game if it’s the last Grig I give!

So E.T, if you need any explanation, is some kind of gross, wrinkly, poo-monster looking thing, and in this game we take control of him following the events of the movie as he traverses levels on an assortment of planets, including a return to Earth. Viewed from an isometric viewpoint, while there are minuscule variations to some of your objectives such as mild puzzle solving, your basic aim is to make it from one end of the level to the other. We won’t get into the story too much as its basically nonsensical, especially when E.T flies his spaceship from his home planet to Earth in order to build a device to phone home. I guess they were gonna crowbar that in there no matter how haphazardly it was gonna be.

Without due care for my mental wellbeing, I threw caution to a methane inundated wind and began my interplanetary adventure. After a succession of brief tutorials teaching me how to control E.T, I was thrust into the game proper armed with the full knowledge of his repertoire. Simple buttons for run, revive plants, telekinesis, and his beam attack were all straight forward enough. Collision detection however, was not, as my beam to stun and follow up beam to kill the enemy seemed hit and miss at best. In fact, the beam often seemed to get hooked up on walls stopping it from making contact with an on rushing enemy leaving me to take a hit. Urgh. Still, I can forgive it. The game’s bound to have hiccups, and as long as it doesn’t get too unreliable, I can live with that. Or at least, that’s what I thought in the early exchanges. For indeed, where I once felt like the game was displaying a child-like innocence (describing killing an enemy as making it ‘go away’ for example) in the opening stages stopping me from wanting to slay it in its tracks, as the later stages up the difficulty ante, the collision problem had me reconsidering my placid attitude and reaching for the nearest weapon from my game-executing arsenal. For no sooner are the opening Botanical levels behind you, the game then starts throwing enemies at you who move so fast in delivering their attacks from completely off screen that even if you could react in time, the beam is so unreliable you couldn’t always count on it being effective. E.T is also an unwieldy blighter, getting hooked up on scenery that is not much of a problem for the most part, but when you’re in desperate need to evade enemies who are much faster than you, nicking the odd edge of a pillar that stops you dead in your tracks is more than a little annoying. By the time you get to the Sclavus location, the game is completely out if control. E.T feels practically suicidal, desperate to throw himself off the nearest ledge to his doom, and hit detection on enemies has nearly given up the ghost. By this point, i was starting to wonder if the most recent slew of enemies i’d encountered were just immune to my attacks in some lazy facade of difficulty cranking, or my hits were not registering coz the game is so awful. All in all, a grigging disaster. I’ll have to look for my £2 worth elsewhere. Tssk!

Right, so that’s no good. What about level design? Often a badly handling game can be saved by a bit of clever level design, so does this area bring it back from the brink of destruction? Of course not. The levels are bland, dull in construction, and all in all a complete chore to play through. If you manage to endure the Botanical levels and progress to the next planet without falling asleep, consider yourself a master of nullifying boredom. Having managed to endure these levels, it was obvious that I was gonna have to dig deep in order to redeem my £2 investment. I braced myself and soldiered on to the next planet where I was perplexed by it’s new found mercilessness, the aforementioned enemies rampant throughout, and even more frustratingly rather cruelly placed to score cheap hits upon your greying frame. I guess that’s one way of having to avoid programming any semblance of A.I. This whole debacle is one of the problems – the game isn’t hard, but it is annoying. £2! So far, not even worth £2! Let’s hurry onwards…. 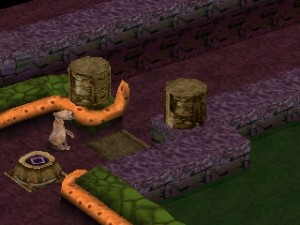 What else we got? How bout dat ‘eye-candy’… shudder. So graphically, publisher UbiSoft would have gone out of their way to ensure the title that they’re putting out and that is proudly emblazoned with the E.T branding, not to mention at the advent of the franchises 20th Anniversary, would be at least passable in this department, surely? I mean, the movie was an effects tour de force with flying bikes and spaceships wowing audiences worldwide. Well, E.T Interplanetary Adventure, takes no cues from the movies whatsoever in pushing the envelope. I almost feel bad for clamping down hard here as its clear the developers made no effort at all. What’s the point in criticising an area of the game that they haven’t even tried in? Just because other developers put a bit of time into squeezing the graphical juice out of the PS1, why should the makers of this game? Tssk! The game looks grigging horrible! E.T himself looks absolutely atrocious, completely inexcusably since we have to look at him the entire time, and enemies are just cobbled together piles of indistinct polygons that looks like a child has waved a mouse randomly over in MS Paint while texture mapping. Levels are crudely coloured with little detail while sometimes key platforms and routes are so poorly rendered I often sat there, grimace firmly adorning my face, as I tried to discern what it was they were trying to depict. Indeed, misunderstandings on what they were aiming for did on occasion lead to accidental deaths, such as falling off a platform or slope that was hard to make out. As is widely acknowledged in gaming, gameplay obviously overshadows graphics in the importance stakes, but when a games graphics are so bad as is often the case in E.T, it can take the gameplay down to its loathsome quagmire with it. And that ain’t good!

Ok, ok, what else? Sound. I mean, after John Williams score for the movie, this has to have had a bit of work put into this area, right? Well, obviously the answer here is going to be no. While the memorable theme from the movie is indeed included on the title screen, there is literally not one other piece of music in the entire game! Now when I say it’s the only piece of music, I don’t even mean that during the levels it loops over and over. No sir. I could even have lived with that since it’s an epic piece of distinguished musical greatness from movie history. This piece of crap has no in game music at all. What it does have, is an ‘ambience’ track of sound effects looping over and over in the background. That means jungle type noises for the most part. What’s even more bizarre, is they couldn’t even loop it successfully, the very obvious fade and restart breaking any hope of maintaining the nonexistent atmosphere. Grigging A. At this rate I’d be ripped off if this had been 2p. Sigh.

So what, if anything, is good about this game? Well, I guess when you lay all its bad points all out on the table it makes for a pretty ugly picture, but somehow, it does manage to heave itself above the sum of its parts. There’s a (admittedly VERY) muted charm about it. It’s almost good to see E.T back, doing… pretty much the complete opposite of what he does best. Although this game could potentially still make Drew Barrymore cry. There is even a mild satisfaction in getting a good run through a level, and at least they’re mostly quite modest in length meaning your sanity isn’t quite pushed to its full limit with a prolonged agony (see the later Werehog levels in Sonic Unleashed for the worst of that kind of buh). 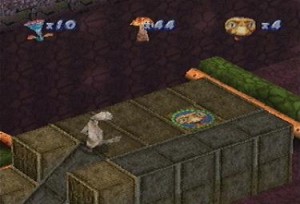 All in all, it’s a pile of crap. But it’s a pile of crap that is more of a bottled distinguished stool sample discretely carried in a classy ladies handbag rather than an immediate public toilet flusher. But no matter how you look at it, you have to admit it’s still poo.

Basically, what there is, is crap. Background ambience is pointless as it does nothing, and the sound effects are terrible. Only the E.T theme on the title screen saves it.

Ok, ok, I admit defeat. They took me for a ride. Almost like a perfect homage to E.T on the Atari 2600, this game sucks. That’s 2 big ones I’ll never see again…