Huh. So it turns out that the whole Atari burying a gazillion E.T cartridges in the desert thing was true. 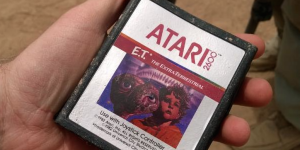 One of the E.T cartridges exhumed from its sandy grave after 30 years in the New Mexico desert.

This is actually pretty cool. Apart from the bit where that mug Major Nelson from Xbox was there. Probably telling bystanders why Xbox Ones initial game ownership policy was awesome. Tssk!

Apparently the whole dig will be covered in depth in a documentary about the history of Atari or something. Could be interesting. Although it’s clear Grig Orig obviously had a hand in this discovery. Plainly inspired by our recent review of E.T on PS1, it’s good to know some savvy Greader (that’s Grig reader, by the by) was spurred to action by taking up his shovel after finishing our article and, with the words of Wilton Knight ringing in his ears, proved that one man can indeed make a difference.

And thus, the legend was shown to be true.

Coincidence? I think not!