‘Of more interest are the new roster additions of Hugo, Poison, Elena, Rolento, and an as yet unannounced female from the Street Fighter universe. Whether she’ll be another rehash like the Cammy-based Bison dolls we’ll have to see.’

Well, the news has dropped. After dragging out the anticipation for months and months and months, Capcom has lifted the lid on their box of secrets and shown off the final Ultra SFIV character. And who did we get? 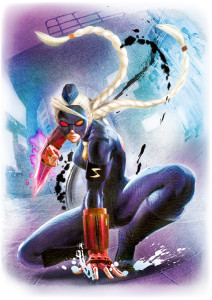 The character, who is Cammy in appearance save for the five minute graphical addition of a mask, is fighter número five in the upcoming SFIV update. As mentioned, a Bison Doll from the comic series, Decapre keeps her scarred face concealed beneath a sorta Batman-style mask, and… well, that’s about it. Lets face it, she’s clearly not been added for her Street Fighter story significance.

Now, while the backlash rages elsewhere across every and all sites that have even a fleeting interest in Street Fighter, here at Grig Towers, I’ve locked myself away in the shadowy recesses for several days to think over things as calmly as I could.

Am I disappointed? Yes. Not so much with the gameplay of the character, even though she looks OP as heck, but the fact that such little effort’s gone in to distinguishing her visually from Cammy. I mean, yeah she’s got an all-over style suit as opposed to Cammy’s bare legs and butt, but outside of the mask, that’s it. I mean, her normal attacks are mostly identical to Cammy, but a few new stance and walk animations could have been implemented, surely?

Am I annoyed? Hmm… I know I should be, but this time I reeeeeally acknowledged that this was Capcom. There were no delusions that Capcom secretly had another four or five new characters stashed away to surprise us with, no awesome new modes, and no amazing enhancements to knock us all bandy. This was a wait for an announcement that I knew was not going to scale any great heights, and so I don’t really feel that annoyed about it. It’s classic Capcom; an underwhelming rehash of assets already created, and the opposite of what fans are asking for from character polls. I’d be silly to expect anything less. Apart from their lie regarding ‘Only four people on the Internet have guessed the character’, leading me to ponder whether it could have been the seldom guessed Jessica Haggar, y’know, just incase Capcom decided to do something un-Capcomish, I’d say that everything’s pretty much as I thought. And people were on to Decapre from day one, and there was certainly more than four of them.

Am I getting the game? Well, while people cry ‘Boycott!’, lets face it… they’re all gonna get the game. I for one am certainly getting it. The identity of the character does not really change much. In fact, the complete abundance of anti-hype generated by Capcoms stupidly long wait for the character reveal ensured the new character was a distant thought in the run up to this game, so to me, this disappointment is not much more than a bump in the road.

What’s more significant is how more casual potential players might react to this. The aforementioned excessively long wait Capcom made the FGC endure was ridiculous, and they certainly haven’t endeared themselves to gamers with making us wait so long for this nonevent of a nothing character. The image of Capcom as a cheap rehash monger, not only of versions of Street Fighter, but also barely altered clone characters, is not going to improve their image with anyone. They certainly won’t be winning any new players that weren’t already going to be buying this.

But on a lighter note… the character does look kinda fun to play. And let’s face it… the game is for the existing fans who have asked for an update rather than the non-fighting game fans who fill comments sections for news of new Street Fighter games going ‘I’ll wait for Super dooper Alpha Zero Street Fighter 75 Arcade Champion Rainbow with a cherry on top edition, hur hur hur!’. Every. Grigging. Time. First time I saw someone make that joke was 1993. 1993 people! Anyway…. back to Decapre. She is different to Cammy in that she is a charge based character and she has little in common with Cammy as far as special moves, supers, and ultras go. And realistically, the hope of Capcom building a character from the ground up was slim at best, and hasn’t really been done since Yun and Yang, and even then they were near duplicates of each other. Were Capcom, who are well documented as having no money left, really gonna pump a bunch of finances into making a real new character? At a reported $200 – 300,000 per new character, we can hardly be surprised that the answer is no.

Maybe I should look at it in plainer terms, coz what we do have is an update to one of the best fighting games ever made. It’s more of something amazing. And at a budget price. The four other characters are welcome additions. Poison is good. Rolento is good. Elena is good. Hugo is… ok, ok. Three of them are welcome additions. And the stages they’ve taken from SFxT are generally pretty decent(ish), except for the stupid space station one. If we hadn’t seen all these elements before, I would think that this was the best game ever. As it stands… I still think its the best game ever, as all the other aspects of the game that are already present I already know to be so good that this has got 800 hours minimum written all over it for me. Sort of similar to my community service sentence from last time Teri Hatcher was in the UK, but we wont go into that now. And for £15, that’s not bad value for money. Probably. And that’s my fanboy therapy done for the day. Maybe tomorrow I’ll try to convince myself I like Xbox One, EA, and Square Enix’s mobile pricing structure. Life’s a lot easier when everything in your hobby doesn’t Grig you right off.