Welcome my Grigadiers, one and all, for another exciting episode of Dibbs Ahoys Reviews of Complete Irrelevance (Darci? A bit like that chick from the Smashing Pumpkins)! In celebration of the release of Titanfall, I thought that it was time to roll out another gem from my archive, reviewing a game that’s a bit like a 2004 version of Titanfall (except it’s not). Once again i have bizarrely turned my back on a stack of awesome games… to play a crap one from beginning to end! I’m starting to worry myself. Anyhoo, on with the show!

Back in the days before Bayonetta was ripping an assortment of fantastical beasts new ring pieces, the red headed vampiric seductress known as Rayne was strutting her leather clad stuff all over the PS2 and original Xbox, which I now can’t call Xbox 1, because people will get confused with Microsofts new monstrosity. Nice one… idiots. But while she may tick all the boxes to get your average Joe Fetishist hot under the collar, how does the blade wielding wonder woman and her second adventure fare in the demanding world of video games? Pull up a pew my grigglings, for our investigation begins… now. 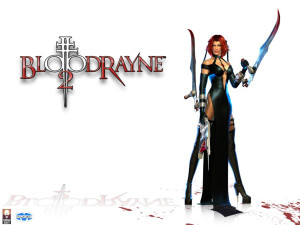 Released in 2004 following a rather average prequel, Bloodrayne 2 moves on 60 odd years from the vampire Nazi-slaying original and focuses on Raynes quest to catch up with her old man. Now this is not your average family reunion, oh no. Well, unless the barbaric slaying of hundreds is the norm at your relatives usual Sunday roast gathering. Each to their own. It’s not long before things get messy and you’re traversing a myriad of levels, slayin’ all over the show, and generally looking to kick some anus around the moon in persuit of Raynes father, who just so happens to be number one on her hit list. Possibly some unresolved pocket money disputes I assume. Or it might be something to do with him making loads of vampires and creating something called The Shroud which allows said foes to meander about in broad day light to happily wreak havoc on all and sundry. Yeah, the story is flakier than the woman from the flake adverts bath. Let’s just sum it up by saying, it’s a bunch of buh and that’s all you really need to know. 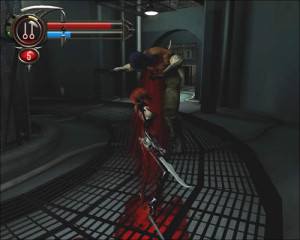 Time for an obligatory screenshot. Looks a bit like somewhere in the Death Star.

Rayne herself is an intriguing character, obviously a product well and truly of her time, when the swelling bra size of Lara Croft could probably march units out of shops by itself, and the obvious thing to do was notch that shizzle up a bit. Clad in tight black and red clothing with bits popping out all over the joint, I don’t think she’ll be on the top of Germaine Greers invite list for her next tea party. Not that much of the character will endear itself to even the most dedicated of perv either once she opens her mouth mind you, as the personality of Rayne verges well on the annoying end of the spectrum meaning she wouldn’t be on the Grigs Friday night Dominos invitational either. With an apparently ‘witty’ line in every situation she finds herself, she is surely a master of some of the gentlest comedy quippery in gaming. While the whole concept of her epic struggle against the forces of evil may win her some sympathisers, for me, her constant witticisms are enough to have me reaching for the nearest clove of garlic. Luckily, a swift tap of the start button can cut much of her cutscene banter short… if at the expense of the story. Believe me; you’ll live.

Rayne is loaded with deadly attacks, from bladed punches and kicks, to grabs and dodge moves that give you plenty of options for dealing with the constant stream of enemy minions. Armed with guns that also acquire new abilities as time goes on, Rayne is a fearsome lass to cross to say the least. The jewel in her crown is her chain projectile which turns into her go-to weapon when you realise it’s potential, throwing enemies around, impaling them on spikes or throwing them into the nearest wood chipper or such like. All sounds like a raucous jaunt of destructive brilliance, right? Well, yes. However, the sum of its parts don’t quite add up to the awesome package it could have been. 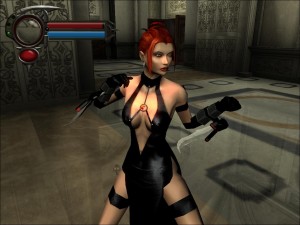 It’s Rayne in her all terrain combat gear. The future of military attire no doubt.

The game is a mixed bag of quality. You can see what they’re getting at, but at the end of the day, it feels like the developers are trying to force square shapes through round holes.

The Infernal Engine, as proudly announced at the heart of the beast upon boot up, feels like its buckling under the pressure of what it’s being asked to cope with. Not that there’s any obvious gruelling burden on it as the visuals are certainly not of the Shadow of the Collosus or God of War standard, but it definitely seems to be choking on the code it’s being fed. The resulting stuttering frame rate can prove hazardous with the gameplay, especially when certain sections basically degenerate into barely interactive slide shows. Alas, this fault coupled with the fact that the graphics generally suck with washed out colours, a lack of model construction detail, and bland textures, does not result in much of a feast for the eyes.

However, a larger part of the games failings seems to have crept in at the design level.

The combination of Raynes ropey and often erratic movements combined with the constant battle with the unwieldy camera do not lend itself to any kind of platforming, let alone the kind here where they seem to have been hoping there was a li’l Prince of Persia flavouring. All their efforts to design platforming fun and frolics are hampered by often crude one-trick-pony-style ideas that they have to repeat as if they just haven’t seemed to have had enough inspiration to flesh out entire levels. And this is before the fact that even at the games best, basic undoings such as when you can’t quite tell how far away a precariously placed overhead bar is as there is such a poor portrayal of depth due to the aforementioned rubbish graphics. The odd bit of amusement that can be so often garnered from a bit of a crappy game can often almost endear a stinker to me, but mild amusement at its cackness can turn to frustrated annoyance on occasion as far as this game goes. When you’re prompted to hack a rope only to fail because you’re not standing around the correct side of it despite the fact that you are making clear contact with it, something has to be acknowledged as being distinctly awry. This is all part of the games greatest trump card of crapness, and without question the thing I will take away from this game more than anything else; some of the worst collision detection in gaming.

While Rayne is equipped with an all manner of attacks and combos, it’s not particularly inspiring to feel like you’re swinging at thin air as you again watch your deadly blades pass straight through your foe for the umpteen millionth time. It’s even less inspiring to also once again watch an enemy boss swing a weapon that clearly misses you, often by some distance, yet see your character being hit. It’s fundamental flaws like being accosted by a fellow who has an easy to avoid ground pound attack which prompts you to jump which you accordingly do, yet awards the CPU character the hit. It’s basic game logic out the window, which could be quite interesting… if it didn’t feel like a bodged hash job of poor programming.

This boss ground my grig on more than one occasion. Freakin’ collision buh…

At the end of the day, Bloodrayne 2 isn’t a bad game. I’d even hasten to say that it actually isn’t even ageing too badly, but that could be because the bar it set upon release was fairly low in the first place. It’s a game that with a little bit of a finer hand while being crafted, could have been the Bayonetta of its day. As it is, the game is like the shoddy budget devoid indie movie that’s been done wrong but wishing it could keep up with the blockbusters of its day, and when every scrappy moment feels like it’s on screen from beginning to end, you’ve really got to have some willpower to soldier through. A shame really, as the ingredients were there for a hotpot of tasty butt-kickery. But alas, if there was ever a time a Roy Walkerism was more called for, then I knoweth not when it could be; it’s good, but it’s not right.

Dull, bland, pretty bad animation, not many polygons on screen, atrocious frame rate, at least on the PS2 version. Rayne looks ok, but almost out of place, but does go some way to sparing it from complete destruction.

The story is played out in CG fashion and comes to you in glorious grain-o-vision. No prob as its such a load of guff you’ll want to skip anyway. Everything else is functional, yet barely worth acknowledging. Acceptable as it manages to sidestep being awful, which under the circumstances makes it slightly better than average.

It’s there. Standard effects, voice acting typically average while not being so bad it’s funny, music likewise. Doesn’t really stand out, nor detract from anything else. Unremarkable.

A plethora of issues, most of which are based off of the fact that at the heart of the game, the collision detection is awful.

Why do I keep playing crappy games? I haven’t even started Xenogears yet, but I play this all the way through. That’s it, next game I play is going to be good! Probably. Oh yeah, Bloodrayne 2 falls slightly short of being average. Not a complete catastrophe, but not far off at the same time. The hours I got out of it probably justified the £2 I spent on it. Just.