Ok, here’s an intriguing one for you.

So it seems that the glut of fan made games that still continue to trickle out for the Dreamcast long after its official plug-pulling by Sega, is about to be joined by a Shire Horse of a stablemate. For indeed, the latest game on the homebrew horizon is none other than a remastering of… wait for it… Snatcher!

So stepping into the fray to fill the undignified void of a Snatcherless future left by Konami, CollectorVision are leaping to the rescue of starving Junkers worldwide to serve up a helping of Cyberpunk goodness. 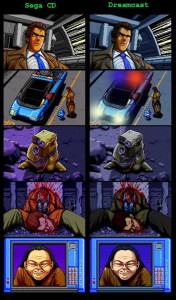 Converting the game to the good ship DC, the team are using the Mega CD version as their template from which they are crafting their future masterpiece. This means the same translation, but with added lighting effects and updated and sharpened artwork. The team are also promising an updated soundtrack.

While its already being pondered as to the reaction from Snatcher purists about the smoothed out, non-pixelated look that would be swimming upstream against the retro current, careth me not, as more Snatcher = good. Especially when Kojima himself seems so distanced from the franchise that we are unlikely to ever see anything official ever again as he continues to churn out another five thousand Metal (yawn) Gear games.

This is great news as far as I’m concerned, and there’s a li’l but of hope bubbling inside me that this could possibly lead to a potential Policenauts port somewhen down the line. ‘Twould be grand ahoy!

How far off this game is, is anyone’s guess, but I’m gonna be keeping a keen eye out for it!

Update: Almost as if to heed the call of the Grig, Kojima, after literally years of not talking about Snatcher, has broken his silence on future projects… except, he basically says he’s not going to be doing any. Bah!

However, what he did say with regards to sequels was, “If someone wants to adapt those games … I would definitely support that person, I would help out that person, but I don’t think there are too many people like that.”

Well, it’s better than no hope at all I guess!