And now the other side of the Nintendo story… 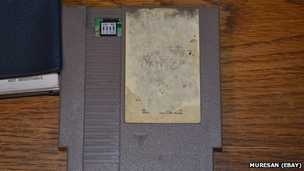 Encapsulated in this game – Nintendo World Championships on the NES – is the other side of the Nintendo story. People won’t pay a few hundred for a Wii U, but they will pay thousands for a bashed up copy of a game that’s over 20 years old – which says to me that Nintendo’s history is more valuable than its present…

According to the BBC, this trashy cart is selling on eBay for over £3,000 – I couldn’t find it myself so they could be making it up just like the whole “people actually like Eastenders” line they’ve been peddling for the last few decades. The little punk was released for a competition in 1990 and has mini versions of Tetris, Mario and Rad Racer on it (so it’s actually not bad value… Ahem…)

It does sound like the sort of thing collectors go crazy for of course – anything rare is gold dust and only 116 of these were released – but it still stands out that you can’t imagine new Nintendo titles coming close. I’ll probably be proved wrong – especially as the Wii U itself is already rare enough (haha) – but that’s the feel you get right now, eh?

Sadly for us, it also probably shows that, as this generation of gamers gets older and starts to earn proper money, all this retro stuff will only get more expensive. People buy up their childhood, and no one who actually played these back in the 90s would have had the money to hoarde em til the last decade. Now they’re all adults, they’re snapping em up. So basically the chances of me ever getting my own copy of Snatcher are getting thinner by the minute. Sniff.

This entry was posted in General and tagged NES, nintendo, snatcher, sniffling. Bookmark the permalink.