You may have noticed there’s been a lot of buh about Nintendo’s troubles recently what with the underwhelming performance of the Wii U and the falling short of expected targets of the 3DS, even though it was the biggest selling console last year. From Nintendo president Iwata having to state that he will fix the companies flagging fortunes and refuse to stand down from his position, to having to stomach $1.2 billion knocked off the company value, it seems that everyone is looking to stick the boot in on Segas old foe. And while many are suggesting Nintendo do a Sega and bow out of the hardware race and release Mario and his fellow stable-mate games on Xbox and PS, I’m actually starting to find Nintendo all the more appealing. Whether it’s the rooting for the underdog and the thrill of the fight for survival that I enjoy, and once endured with Sega before the inevitable happened, or the fact that they actually have some games I actually wouldn’t mind having a go at, I’m definitely drawn to 3DS and Wii U. Not that I can afford either, but if I had money, I’d definitely get them. Sigh. Anyway, here are a few games that have caught my eye for Wii U.

Super Mario 3D World: Let’s get the obvious ones out the way first, shall we? Mario has been the default go to character to give them critical acclaim for a long time now, and this Wii U offering is no different. Throwing four player shenanigans in to the mix with the selectable cast of Super Mario 2 on offer, there’s no sniffing at a new Mario game. Plus, it’s the plumbers first HD offering. Scoring massive (and admittedly standard and usually slightly exaggerated because its Mario) review marks across the board. How could you say no? 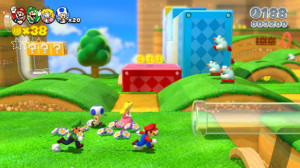 Zelda Wind Waker HD: Another default entry. While not a new game per se, perhaps Ninty got caught a li’l short and needed a Zelda ASAP to push out the door. Whatever the reason, Wind Waker was a cool addition to the Zelda family, so to have this HD’d up is worth a look. Couldn’t see myself replaying the whole thing again, but you don’t know when you’re gonna get sucked in to a game, so never say never! Worth shelf space if nothing else. 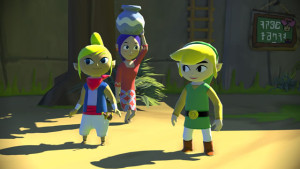 Mario Kart: Yep. I’m not surprising anyone here am I? I didn’t think I’d bat an eyelid at a new Mario Kart. I mean how many times can you play the same game over and over? But the trailer pleasantly surprised me with all the ideas and driving up walls and multiple surface capers. It’s obviously still gonna be worse than the original, but looks good nonetheless. Just please take out those freakin’ blue shells, please! 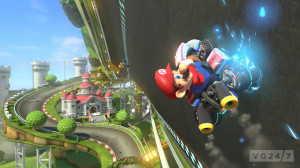 X: Developed by the same guy who bought us Xenogears, Xenosaga, and more recently the highly sought after Wii game, Xenoblade Chronicles, (the obviously Xeno-something) X is coming exclusively to Wii U. It’s looking mighty fine too, with vast landscapes and huge beasts roaming the world to duel with, there is bound to be much excellent JRPG flavoured butt-kickery on offer here. My spider-sense is going nuts over this one so I’m hoping for a fine game! With the pedigree of titles the developers have had a hand in, I trust I won’t be disappointed. And if I am, then we might just have to unlock the Grig Orig dungeon and let that buffoon of an old mascot, The Grig, free of his tether to wreak havoc on the dev team. And that’s something no one wants to happen. 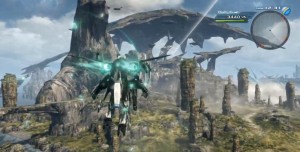 Bayonetta 2: This was obviously a big story upon announcement, as the Nintendo funded project is going to be a Wii U exclusive, locking out most of the people who supported the original. The furore was intense, but at the end of the day, if Nintendo are paying for it, there’s not much anyone can do about it as it wouldn’t have been made without their money. Could be very good with some promising looking set pieces that look just as manic and bizarre as its predecessor, albeit more grandiose in scale. Just put a cheat (or more likely in this day and age, a paid DLC) to have her with her old design coz the new short-haired look sucks. In my humble opinion of course… nay, fact! Anyway, let’s hope it’s a goodun! 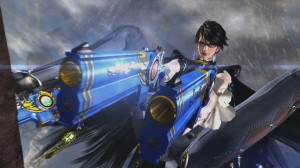 Well, thats a few of my personal preferences. Course, the Wii U has got it’s work cut out for it, despite the ten million or so sales that will follow the publication of this article, such is the power of Grig. But alas, Nintendo recently reduced its sales predictions from 9 million to 2 million, which is a heck of a drop. The thing is it’s kinda understandable at this point.

I was in a games shop recently and witnessed something that would seem quite representative of the current Wii U situation – there were a couple browsing the Wii games when the lady of the pair picked up a blue box and asked her accompanying gentleman, ‘What’s a Wii U?’. Primed to fill her in on the specifics, said gentleman merely shrugged his shoulders and replied ‘Dunno.’, before continuing their merry excursion in no doubt uneducated generic software browsery. And that’s exactly one of their main problems – people don’t know what Wii U is, if they even know it exists at all. I recently had to inform a PS4 owning friend, usually quite clued up on gaming, that there was a new Wii console. He asked when its coming out. I told him that it came out in 2012. He looked confused. This could be a good area for Nintendo to start.

But whatever. Personally, I’m gonna forget about flagging sales, and that they should have called it Wii 2, and not even worry about the massively underpowered chip architecture within said beast. Instead, I’m gonna embrace the potential death cries of this wounded behemoth and hope for the best, coz if they’re anything like Sega, some of their finest work could start cropping up now they’re trying so desperately to keep afloat, a la the Dreamcast.

2 Responses to Nintend-woe. Good one. Not.