Can my childhood heroes please stop being culled? This year has already seen the departure of Egon, and now, the Ultimate Warrior has followed suit. Sigh…

Prompted by the events of this week to revisit Super Wrestlemania from the days when WWF was still actually called WWF, a nostalgic romp of grand proportions was had! 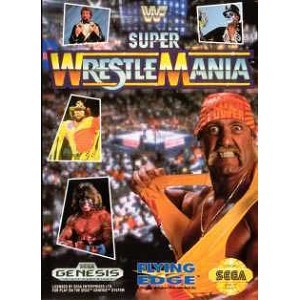 As a young lad, my interest in WWF went thus: the Ultimate Warrior. Fleeting though my following of wrestling was, as just at the height of his awesomeness, he went on hiatus taking my interest with him, my gaming facination was a li’l more prominent. And back in those finance devoid days, pickings were slim when it came to building a decent games library. The sacrifice of my Master System hitting the pages of the Friday-Ad to ensure I could buy Streets of Rage 2 was a desperate move, but one that was a necessity. Thus, it’s hard for me to look back and remember my thought pattern as I came to the decision that the rare possibility of adding a new forty-pounder of a game should be used on WWF, which although regarded as ok, certainly wasn’t at the top of many peoples wish lists. After releasing on the SNES, there was a period of time before the game came to the Megadrive, but it was the roster change that occurred that was the defining deal breaker for me; the SNES version didn’t have the Ultimate Warrior, but the Megadrive version did. Sale!

Releasing at a time when I was only just starting to become suspicious of the legitimacy of this wrestling malarkey, the obvious contact missing punches of the WWF performers were a distant memory as I proceeded to pound my opponents into the canvas on the Megadrive. And whilst certainly not in the realm of Ragery, it was often a hoot and a half! But how does it fare in 2014? Hmm…

Well, obviously any young kid today will think this game is crap, and that’s for sure. Thankfully, I happen to have the finest pair of nostalgic beer goggles to hand negating any type of 2014 gaming measurement which will leave any current day youth muchly confused should they clap their chocolate-laden mitts on this game, baffled at the suckage in contrast to the fact that this review will declare ‘I like this game!’. 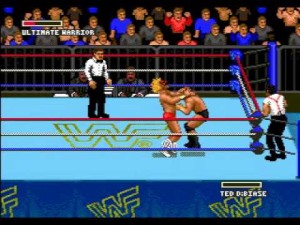 The Ultimate Warrior teaching another clown who’s boss with a head-butt. I’m not gonna lie. All these screenshots are likely to look the same.

Yes, that’s right. I like this game. In fact, I still like this game. As in, I did as a kid, and I still do now. It’s not perfect by any regard, but it’s still a fun, mash-tastic example of early 90’s wrestling butt-kickery. Taking it’s cues from such awesome arcade games as the WWF Wrestlefest titles, the lock up grappling system lead to many a RSI-esque ailment among the days youth, and is a darn sight more difficult to endure in my clapped out mid-thirties. But soldier on I did, until once again I was witnessing the Warrior throwing fools all over the show, bouncing them against the ropes, slamming them, head-butting them, and generally kicking ayne before being crowned with the WWF championship belt thingy, the blocks of the universes correctness falling snugly into place as order is restored.

Whilst many a reviewer may have dismissed this button-bashing mechanic as being fairly primitive, even back then, it certainly made for some frenzied matches as we pounded the pads in a sweaty haze of exuberance. Sure, it could be frustrating to be on the receiving end of a nimble-fingered pummelling from a slick-tapping friend who was a lot quicker than you, but fret not, as high-level mashery is not the only gameplay options on offer! 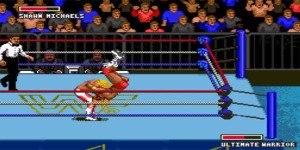 The Ultimate Warrior getting slammed. You can tell this is a video game as this wouldn’t happen in real life.

Making up the wrestlers repertoires are a selection of normal moves ranging from punches and kicks, to running elbows, drop kicks, and leg drops from the top ropes. Mastering the full spectrum of the moves on offer is essential for keeping out your opponent when you’re being licked in the art of tappery, bringing in a decent level of strategic depth. Whilst the incredible diversity of the likes of Street Fighter 2 and it’s amazing range of different moves and characters are a million miles off of what WWF has to offer, what with most of the wrestlers effectively being the same gameplay wise, there are character specific special moves throw in to the mix. As with many fighting games, some characters signature moves are a lot better than others, and the Warrior gets shafted a little in this department with his pounce move taking an age to activate as he jogs on the spot before launching forward making it probably the easiest move to avoid in the whole game. Technically, this shortcoming could make him low tier in the context of this game, but since nobody can ever beat the Ultimate Warrior, it doesn’t really matter much. Would of been nice to be a bit quicker though. Sigh…

Graphically, the game ranges from average, to a bit cack, the Megadrive version lacking a little of the smoother gradients afforded to the SNES version by it’s ability to put more colours on screen, although the Megadrive version looks a bit sharper. Character art suffers a little for the lack of colour though, and taking a look at the title screen versions of Hulk Hogan leaves him looking like someone’s swapped his morning power drink for a canister of mutigen on the Megadrive. Ultimately, the in-game graphics are sufficient enough to portray the action, but next to the bold sprites of the aforementioned arcade Wrestlefest games, Super Wrestlemania leaves itself a little bit wanting with far smaller and less impressive sprites.

As I mentioned earlier, the game is far from perfect, and this is easily apparent in terms of the animation. The frames for some motions, such as walking, seem minimal and jar with the screens vertical and horizontal scrolling juddering along about as comfortably as a night in a nappy full of cack. The difference between this basic movement contrasts highly against certain other motions when they activate, such as the drop kick animation which almost looks mo-capped, such is its seemingly greater frames of animation. This leaves the game somewhat inconsistent in this department, but overall, as with the of the rest of the game, it gets the job done, one way or the other.

One issue of concern, that often results in frustration, is that the responsiveness of the controls is tipping way over to the iffy side of the scales. At some points I was starting to wonder if my controller was broken, such was the failure to respond of my character. Most of the time, things flow along as nicely as the dodgy animation allows, but it certainly has it’s moments. Collision detection often joins it in sporadic bouts of ineffectual madness, but overall, the lapses of crapness can be forgiven for the times the game gets it right. 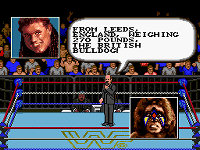 Davey Boy Smith! Representing the U.K! Shame he’s up against the Warrior. He will definitely lose. Also no longer with us. Sigh…

Sound wise, there’s nothing to write home about. Sound effects are basic, a little scratchy, and are generally left feeling like a bit of an after thought, although hit sounds can be satisfyingly crunchy on occasion. The music, what little there is, is fairly crap though. With each of the wrestlers anthems being given a chip-tune make over, they lose their effectiveness to a large degree, although I get the feeling that this flaw is more to do with the devs making a bad job of them rather than what could have been achieved. An opportunity missed perhaps, but their use is so fleeting that maybe it’s not too much of an issue. Would’ve been nice to have rocked out to a decent version of the Warriors awesome intro though. I’ll just get the tune up on YouTube next time perhaps.

Presentation is notably lacking. Massively, in fact. The basic menu screens are functional though nothing pretty, and the screen you receive for winning the championship looks like it was knocked up in two minutes. The static screen in the style of a newspaper declaring your victory is a far cry from the cinematics of the likes of Flashback, but hey ho. I just can’t help but feel a little disappointed and short changed for my efforts as the credits roll. Very C64… in a bad way.

Overall, the game is an enjoyable representation of WWF for the time, and outside of the arcade, was probably the best wrestling game of its time. With a little more spit and polish, ambition, and perhaps a bit more uniqueness for the wrestlers, it could have been awesome. As it is, it’s still good, it’s just not great. But… it does have the Ultimate Warrior in it. And that’s the main thing.

They do the job, with characters well recognisable and the ring decently rendered. Animation is a mixed bag, the good elements picking the crap bits up off the floor and holding things together.

Enjoyable wrestling fun and frolics. What it lacks in Street Fighter-like depth, it makes up for in mashing the poop out of the pad. A good blend of frantic button hammering and delicate strategy.

Aw, it sucks I’m afraid. Just turn the sound off and whack on a CD… or MP3 if that’s too old school. Screw it, let’s keep it retro – put on an audio cassette!

A good game tarnished by a few weak areas, a little underdeveloped, but ultimately fun. While my retro specs maybe severely rose tinted this fine morn, careth me not! I’m off for another go, and I suggest you all do the same. Just remember to pick the Ultimate Warrior!