It nearly got away with it. So very nearly. It thought it had been long enough to duck the Grig-radar. But there’s no way that I can let it slide. It’s the duty of Grig to haul this piece of crap up on its heinous crimes against gaming just as an underlying warning incase you were ever tempted to have a crack at it. 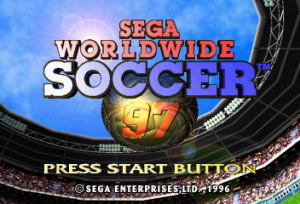 Now this may seem as random as Grig, but to put you in the picture, I’m currently working through my Saturn back catalogue and this game was next in the stack. I’m not even gonna give this game the dignity of a review. It’s not even worth detailing why it’s so atrocious. Just know that it is. And certainly don’t be fooled into trying it, no matter how cheap you see it for. If you pay 20p for it, mark my words – you will have been conned. 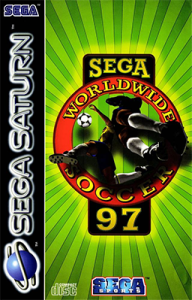 If you ever see this game, and you will, run. Run for your lives.

Y’see, I fell into one such trap a while back. The game was haunting me. Stalking me. Literally everywhere I went, this game seemed to be waiting for me. I could have probably owned about ten copies of it if i’d only bought a third of them. And I only go to about three places. And thus, one sunny day I caved and bought it. Terrible condition it was too, scratched to within an inch of functionality, probably the worst from the excessive batch I kept chancing upon. But this particular day, I’d had enough.

‘How bad can it be?’ I uttered, picking it up and taking it to the counter.

Turned out very. Should have known. Even the latest FIFA on current gen is crap and that’s after companies have had 20+ years of trial and (lots of) error. Worked like a treat of course upon popping it in the Saturn, rather typically. And naturally my day was ruined. 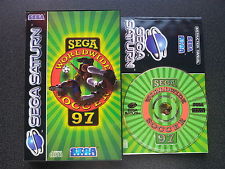 Full profile, just for information/your own safety. Don’t be surprised if you see this picture on Crime Watch someday.

This game is TERRIBLE! And I don’t just mean by today’s standards. This game would have been awful upon release, no doubt about it.

FIFA 1 on the Megadrive is infinitely superior to this. In fact, those flick freekick iOS games are better than this. I mean, there’s just nothing going on here. Every element of the game is sodden with diarrhoea. The sound is atrocious, with the same solitary chant looping throughout the entire duration of the match. The gameplay is a montage of cliched failings collated into one turd-fest of a game. The graphics suck monkey-ayne through a straw, puking its content back into the simians own mouth only to wait for it to come back round again like some kind perpetual faecal irrigation system. It’s just HORRIBLE! 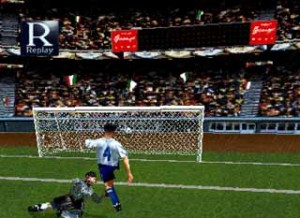 This is the most flattering shot I could find of this game. It’s surely the Saturns E.T. And much like that game, there sure seems to be more copies of it than there are actual Saturns.

I feel that it’s only fair that the Grig does its public service-esque duty from a moral perspective, as if you’re like me and keep running into this, you may also be tempted.

It’s for your own good. And if you have a copy, please send it to your nearest Grig games amnesty depot. We heard there’s currently a big hole in the Nevada desert waiting to be filled in this weekend and we’re gonna see if we can do away with this atrocity once and for all.

This entry was posted in Dibbs Ahoy, General, Retro, Sega. Bookmark the permalink.