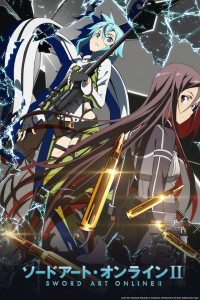 As we count down the days for the Vita release of Sword Art Online: Hollow Fragment, a second series of the anime has started. As of writing episode six is available on crunchy roll, they have an app and if you don’t mind adverts it’s one of the many titles available for streaming hurrah.

You may be thinking, yeah but how can they do more of the same? well without too many spoilerifics, it’s actually pretty neat, there are some real world scenes with Kirito, Asuna, Silica, Lisbeth and Suguha about a year after SAO which is nice to see, and they also still play ALfheim Online with Klein and Agil. But because of the seed there are many more emersive VR games now only without the whole you’re trapped until you beat the game or dying is real thing.

One of the new VR games is Gun Gale Online which focuses on gun combat, here we get introduced to new characters and combat styles. Kirito is asked by Kikuoka Seijiro of the Ministry of Internal Affairs’ Virtual Division to join the game using his stats from his previous games as a converted player. The hope is to find out more about the character ‘Death Gun’ who shot a highly skilled player in game but at the same time they disconnected and were later found dead from heart failure. Seijiro and Kirito are 99% sure its coincidental, but that remaining 1% takes us into new worlds following Kirito once again with a new spin, new characters, forming new bonds. It does work and so far is a welcome addition to the series.

The only downside so far is that Kirito is a little feminine looking, so I think I’ll pass on a figure of him from season 2, though the new character Sinon does look pretty cool so a figure of her could easily end up in my collection.

And a google search later reveals a rather naff looking figure coming to forbidden planet but ebay sellers already offering a pre-order of quite a well made 1/8 figure. 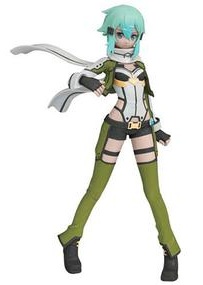 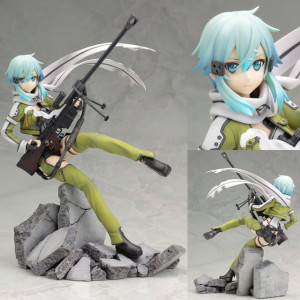 This entry was posted in Anime, General, lartens. Bookmark the permalink.